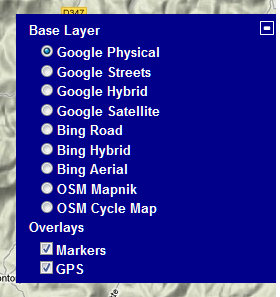 The table below shows some sample routes between overnight stops. On many days it will be possible to choose from a number of rides of varying difficulty.

Against each ride is shown its length (in kilometres) and total climb (in metres). Also shown is the Effective Distance which is the actual distance plus 5 km for each 100 m climbed. This can be used to gauge the relative difficulty of each ride.

On the 'Openlayers' maps there is a '+' sign in the top right hand corner. Clicking on this allows you to switch between a range of different map backgrounds.

Significant points on each route are marked with a star.

For comparison the equivalent values for the Dordogne & Provence/Cevennes trips were ...