This page contains examples of the best and worst cycle facilities in and around Exeter. See also a separate page describing Maintenance Issues 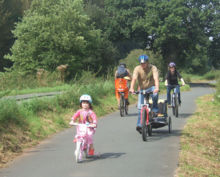 The developing Exe Estuary Route is the jewel in Exeter's crown. It provides a safe off-road route south from the centre of Exeter to Turf Locks on the west side of the estuary and Exmouth on the east.

The route follows the canal and river southwards and provides both a commuter route for workers in the centre of Exeter and a leisure route for others - linking Exeter Quay and its cafes, restaurants and shops with the countryside and riverside to the south.

The Exeter Cycle Map was re-released in 2008 in a new style and format. The new design (unlike the old one) labels roads with their names and so is much easier for a newcomer to use. Maps in the same design have been released for Exmouth, Tiverton, Newton Abbot and Barnstaple.

The route from Exminster to Marsh Barton uses a combination of shared footways, off road paths and on road cycle lanes to provide a direct convenient access to the industrial estate. 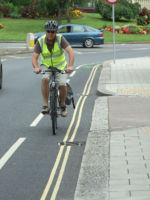 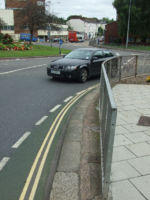 Cycle lane tapering to nothing by the roundabout

The on-road cycle lane on the south side of Paris Street runs from the roundabout at the bottom of the hill up to the traffic lights at the Bampfylde Street junction.

For most of its length the Paris Street cycle lane is 1000 mm wide.

The cycle lane starts at the roundabout at the eastern end of Paris Street where Western Way, Heavitree Road, Cheake Street and Paris Street all meet. 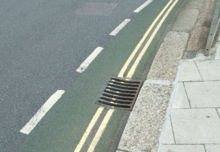 840 mm wide at this point adjacent to the barrier 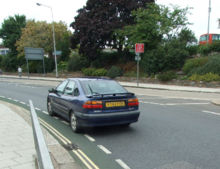 Update November 2012 - Proposals have been agreed to install 1.5m wide cycle lanes on both side of Paris Street.

The lane is on the left hand side of the road. The lane is appropriate for cyclists turning left onto Western Way. However it is positively dangerous for cyclists wishing to go straight on into Sidwell Strteet or right into Old Tiverton Road.

Cyclists wishing to go straight on or turn right need to be in the centre of the lane. If they are on the left they have to cross traffic approaching from behind. However motorists, seeing the cycle lane then expect cyclists to be in it, this can result in abuse of cyclists who are executing a legitimate right turn. 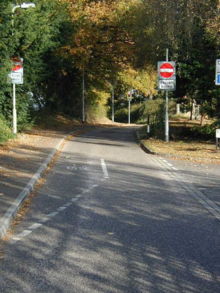 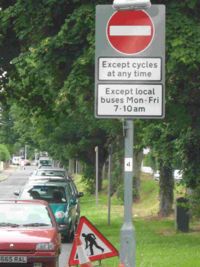 There are No Entry signs in Digby Drive, at both ends of the bus-only section, which appear to prohibit cycling (image left). However, the footway was widened last year, with white pedestrian and cycle symbols painted on it and the traffic order specifically allows cycling.

This issue was first raised in 2007, but the signs haven't changed.

There are two simple solutions to this problem. Either add supplementary signs: "Except cycles" or remove the No Entry sign on the footway and replace it with a blue shared footway sign.

The "Except cycles" solution was recently advocated by the National CTC organisation. It has also been in place on the Service Road next to Topsham Road for some years (image right). 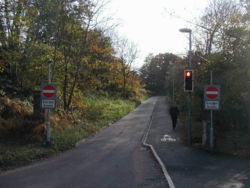 Which side for cyclists on this Segregated Footway?

Cycle paths have been incorporated into this estate with a variety of white road markings and miscellaneous defects. 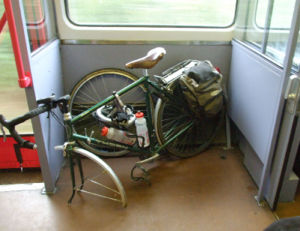 Space for bikes on the 8:50 Exmouth-Barnstaple train

Space for bikes on local services has deteriorated over the last few years.

Previously rolling stock on the Exmouth-Exeter-Barnstaple line provided reasonable space for bikes in an area which could be used by wheelchair users and (using flip down seats) normal passengers.

The 'new' rolling stock has a much smaller space - presumably for wheelchair users - which is insufficient to hold a single bike - even with the front wheel removed.

At a time when the developing Exe Estuary Way will increase the demand for cycle carriage on this route it is disappointing that the service is being reduced.

This junction was recently remodelled but the signs and signals don't adequately account for cyclists. 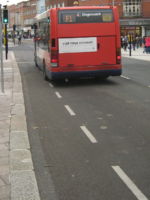 There are a number of concerns about this approach:

1. Advanced Stop Line (ASL) and feeder lane (Photo left). The installation of an ASL on this approach was well intentioned, but is inappropriate in this location where the only vehicles are buses and cycles. The purpose of feeder lanes is to allow cyclists to get to the front of traffic queues and improve safety, particularly when turning movements are involved. This is inappropriate in this location because passing buses on the inside on a narrow feeder lane is unsafe (risk of passengers stepping off bus and bus moving and squeezing cyclist against kerb).

2. Traffic light optics. The green signal on the traffic signals is an arrow straight ahead, which implies that movement is only allowed in the indicated direction. This is incorrect because there is no legal restriction on cycles turning left or right. Additionally, since bus movements are usually fixed by their timetable they don't need an arrow to assist them. The green arrow should be replaced with a full green signal. 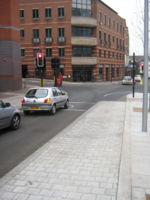 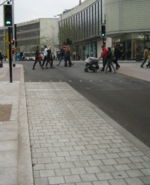 Cyclists have their own signals, which allow them to turn in all directions (photo left). There is a possible conflict with the simultaneous green man signals on the Sidwell St and High St arms, but this is acceptable in the context of a semi-pedestrianised area where you expect people to walk in front of you without looking.

Although the contra-flow cyclepath is surfaced with small paviours they are a good running surface for slow uphill cycling. However, there is a complete absence of signs to tell cyclists and pedestrians that this is a cycle path (see photo right). This can be easily remedied by adding logos on the path. 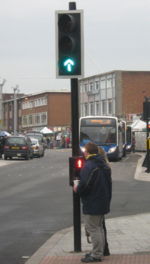 Traffic light optics. As for the Sidwell Street approach above, the green arrow should be replaced with a full green signal as there are no restrictions on cyclists turning left or right.