One of the 350 participants in the charity ride

This year Cycle Sunday was held on the Flower Pots Playing Field, opposire Miller's Crossing, instead of its usual venue at Piazza Terracina on the Quay. 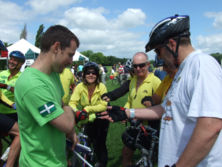 The day was jointly sponsored by the Council and Ashfords Solicitors.

The centre piece of the event was a charity ride down the riverside path to either the Swing Bridge or the Turf. The ride was to raise money for the local cancer charity - FORCE. Over 350 participants took part in the ride and were rewarded for their efforts with a goodie bag. 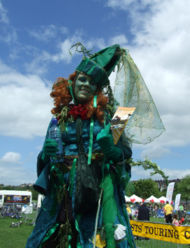 A green giant joining the CTC

During the day there were a series of events.

Alongside Miller's Crossing is a facility for skateboard and BMX riders. A group of professional BMX riders kept the crowd entertained with their tricks ... and the odd spill.

The centre of the field was given over to the Crazy Bikes which as always proved to be very popular with the kids ... and quite quite a few adults.

A pair of ten foot tall green giants scoured the nearby streets to direct people to the Cycle Sunday Event ... one of the giants was persuaded by Roy to take a CTC membership leaflet away with her. 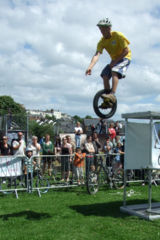 A six foot jump on a unicycle

As in previous years Andei Burton and his colleagues Tim and Lucas gave a display of trial bike riding. 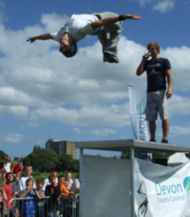 Doing a back flip without your bike

This year their display included a unicycle on which Tim was able to jump from a six foot platform onto an empty coke can.

Their team this year was supplemented by a practitioner of parkour ... the increasingly popular activity of leaping over obstacles such as walls and roofs. As these were in short supply in the middle of the Flower Pot field he had to make do with Andrei's scaffolding platform.

The queue for refreshments

Around the field were a range of stalls. 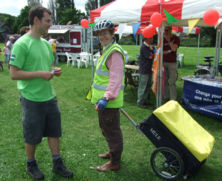 Zsolt Schuller of Cycle Exeter and Moira MacDonald of Sustrans

Ashford's had a large stand for registering and rewarding the charity bike riders. The Bike Shed supplied Dr Bike who was kept busy throughout the day fettling bikes, Sidwell Cycles had a disply of mountain bikes. The police were kept very busy security marking bikes.

Sustrans has a stall which was signing up people to their "Swap just one car trip and Change your World" Campaign and last but not least there was an Exeter CTC stand.

This was manned by Ken and Iris Strong, Roy Russell, Kirby James and John Rowland plus a number of others who dropped in on their Sunday bike rides.