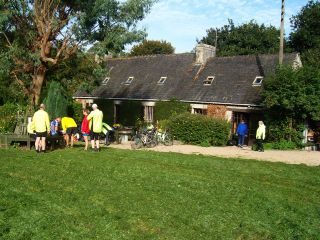 Home for the week - Moulin Conan

Brittany Breaks advertise regularly in the Highwayman and offer a range of holidays at a Breton Farmhouse deep in the countryside.

For cyclists they can accept groups of 10-16. Typically the group will be picked up from a location near Exeter and bikes, luggage and participants are transfered by minibus and trailer via the Plymouth-Roscoff ferry to the farmhouse which is about 10 miles east of Morlaix.

If any CTC Exeter riders are interested in a trip in September 2009 - can they let the Secretary know - and we can assess the level of interest. At the moment a 'slot' is available from Tuesday 1st September to Tuesday 8th September 2009 - although the date may have to shift by a day either way depending on the ferry schedule. A week's full board plus the ferry fare will come to just over £400 - again the exact amount will depend on whether a day or night ferry crossing is used. 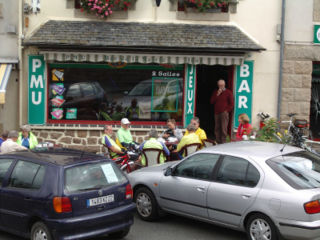 Thirteen bicycles (12 singles and 1 tandem), complete with their 14 riders, met at Stoke Canon village, near Exeter, where the minibus with a bicycle trailer in tow was due to take us all to Plymouth for the late morning ferry crossing to Roscoff. Four of us were from the Exeter section, namely Arthur and Catherine Civill, Wendy Luxton and Tom Dunn. After a smooth crossing, the minibus took us to our French farmhouse accommodation, which was to be our base for the next 7 nights. The following morning, Wednesday, saw us split into 2 groups which was to be the pattern for the rest of the holiday. The main group’s ride was to the coast and back. Elevenses were taken at Plestin-les-Greves, and by lunchtime we had reached the coast at Locquirec and St Michel-en-Greve, where we enjoyed the packed lunch provided by our host. By the time we returned to the farmhouse, we had logged 55 miles, with the weather being cool but dry, with some hazy sunshine. 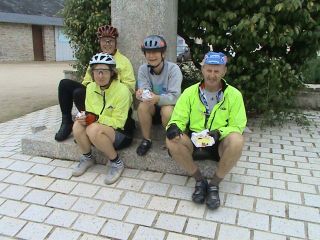 On the way back from Huelgoat, l to r Arthur, Cath, Wendy, Derek

The next day was an inland ride to Huelgoat and back, which many of you may know is a fascinating town with very unusual rock formations and a ‘devil’s cauldron’ where the river spills over the huge granite boulders. Far below we saw a bicycle which had either been thrown down or was the result of some unfortunate accident, we shall never know, but none of us felt foolhardy enough to clamber down to find out. Heavy cloud accompanied us all day, turning to rain for the ride back. A shorter 38 miles, due to the weather. 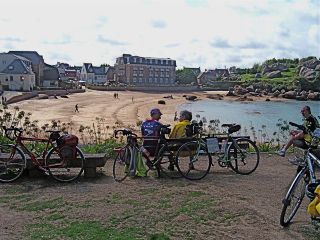 After a very stormy night with strong winds and driving rain (well, it battered against my bedroom window which I had left open for ventilation and the rain soaked my cycling shorts), Friday’s weather looked none too promising, but we set off again hoping it would improve. Elevenses were taken at Plougneau and on leaving there the rain started again. We cycled on to Les Ponthou for lunch, by which time the rain was really heavy (soggy baguettes!), so the decision was taken to return to base early, looking in at the supermarket in Guerlesquin on the way. As the rain had now eased a little, we decided to cycle around the lake adjoining the town. Just a modest 25 miles covered this day. 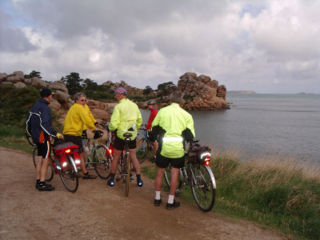 Saturday is always market day in Morlaix, so where better to go, but once again the weather was not on our side. We decided to forego the elevenses stop and we rode to Morlaix in one hop, with the last mile into the town centre being a long downhill descent. The market is held under the railway viaduct, but our first destination was a cafe for an overdue toilet and coffee stop, in that order! By now the rain was coming down like stair-rods, and even the market stall-holders looked fed up, with many of them packing up early. The decision was made not to linger here any longer but to get out of town with the hope that the weather might improve (pigs might fly!). 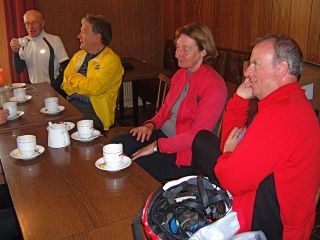 Alan and Tom wanted to stay a little longer, so the others set off northwards to follow the river, and when Alan and Tom left Morlaix, they took a south route out of town, but no matter which way you go, it’s all uphill! The rain continued for the rest of the afternoon, typically leaving off just as Alan and Tom got back, with 42 miles recorded, the rest arriving over an hour later with around 56 miles on the clock. After such a soggy ride, it was good to see that our host had a large log fire blazing away, which served the dual purpose of not only warming us up, but helping to dry out our pegged out wet clothes! 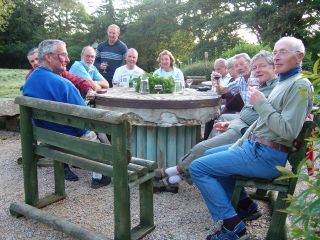 Hooray, Sunday dawned bright and sunny! Today was to be another ride to the coast, this time to the 'Pink Granite Coast', around 40 miles away. Because most of us were by now getting a little fed up with so much rain, our host took us and our bikes by minibus to the coast, the plan being to cycle around and then ride back. Derek was the only exception, he decided to set off before taking breakfast and to meet up with us there. Our destination was Ploumanach and the headland path was strictly 'no cycling', so it was necessary to dismount and push our bikes for the mile-long walk, which was no real hardship as there was so much to see. The cliffs and boulders are really quite pink and many strange shapes are to be seen. At the end of the walk was a sandy beach, which seemed an appropriate spot to have our packed lunch and then to have beverages in an outside cafe, the weather for once being very kind to us. From here we mounted our bikes for the first time today (except Derek of course) for a great coast ride, ending up on a small island called Ile Grande, with road bridge access. Sadly it was time to leave this delightful coast for the ride back to the ranch, via Lannion. Easily the best day out, with 38 miles covered (85 for Derek). 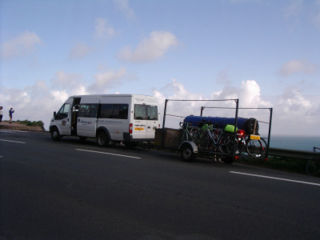 Monday dawned just as sunny as the previous day, and being our last day we decided on an inland ride to Callac. A few of us, however, wanted to visit the Monday morning market in Guerlesquin, as the Saturday market in Morlaix was a washout (literally). After visiting the market, Tom rode solo to Callac, but no sign of the others, so after taking lunch, Tom proceeded to ride back, and 5 miles out he met the others still en route to Callac! We all met up back at the farmhouse, Tom having ridden 33 miles and the others around 45 miles. Our last evening meal together was taken at a roadside restaurant, usually frequented by French lorry drivers, but as far removed from our English transport cafes as you can get!

Tuesday saw us visiting the local supermarket to stock up on some wine, etc. then a late 'brunch' before loading our bikes on the trailer for the return to Roscoff for the ferry back to Plymouth. Our last get-together was for a very good meal in the dining room of the ferry. Apart from the weather, which could have been kinder, a great holiday, with good company, good food and good cycle rides.