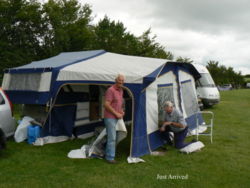 John Rowland: In the event there were nine campers with two local B&Bers and Jill joined us for Sunday's ride. The campsite at Halse Farm proved to be adequate and well sited for access to the moor and being central was also a good starting point for the on-roaders. The weather was disappointing, although Friday afternoon was cheerful enough, by Saturday the showers had gathered pace and weight so that by the afternoon and evening it became quite stormy. Sunday started wet but as the day worn on the sun appeared and the afternoon became quite pleasant. Tents dried out and were ready for packing on our return at 6pm that afternoon.

Visits to the Badger's Holt pub for dinner on Friday and Saturday were a success. We were able to join tables and make a virtual circle in our own corner of the dining room. So much cycling talk and laughter went on into the relative late hours on both nights. Alan led the on-roaders on Saturday but unfortunately suffered a fall resulting in a visit to Minehead hospital for a clear up of deep cuts in his knee (no stitches). As he had cycled to the weekend he needed a lift back to Exeter after a further visit to hospital on the Sunday.

John led four off-roaders on Saturday and Kirby the on-roaders on Sunday. There was no off-road on the second day, but Alan and John managed to meet up with the rest at Simonsbath for coffee before the riders left for coastal roads and Sarah chose to make her own way, also via Dunkery Beacon.

Emails were exchanged with Mrs Brown the owner of Halse Farm on completion and an extract of her reply is worth repeating here. " Many thanks for that and pleased to hear that in spite of the weather you had a good enough time to contemplate coming again. Hope to see you again next year and look forward to the stir you all caused being repeated. (Levels of fitness and muscle tone much admired by younger campers). "

Alan Harding: I arrived at the Halse Farm campsite around 10.00 a.m. to meet the riders participating, but unfortunately we missed each other, as everyone was waiting inside their tents due to a heavy shower! Decided to leave the campsite and aim for Wimbleball Lake Café. In retrospect, I should have looked a little harder before departing! Eventually, after trying to make contact by mobile phone at Winsford (where again there was nobody waiting), I got through to Kirby when reaching the top of Exton hill. Agreed we all meet at the coffee stop! 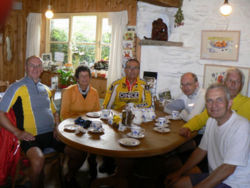 Continued on my own to the café at Wimbleball Lake when there was another heavy shower, but decided to return as far as Pulhams Mill Craft Centre where earlier on I had spotted a tearoom. Very soon after I arrived here, all the other on road riders came along so I was able to point them to the tearoom, instead of 2 short steep climbs up to Wimbleball Lake!

The tearoom turned out to be very cosy and we all enjoyed some of the homemade cakes and beverages. There was a very friendly black dog demanding everyone's attention! As time was getting on, it was tempting to stay and have lunch (someone thought of Sunday roast here for the next day!), but carry on we must!

At the turning for Wimbleball Lake Café, I had a discussion with my 'team' whether to have lunch at Wimbleball Lake or the Valiant Soldier, Roadwater. We opted for Roadwater even though it could take about 1¼ hours to get there. On our way we were able to see one section of the old West Somerset Mineral Railway, before a very long descent to Roadwater. We were able to enjoy our snacks at the outside garden of the Valiant Soldier and miss the rain, until we were ready to move.

Took the road for Luxborough and now it seemed the rain was settling for the rest of the day, so we stopped to put on our 'waterproofs'. This was a pity, because this beautiful wooded valley would have looked much better with a little sun! Also, it was along this road when I fell off on my left side and badly grazed my knee. Was very lucky to be surrounded by a team of caring cyclists, when I was treating my wounds as best as possible, with Don and maybe others kindly providing me with first aid 'equipment/items'.

After discussing what to do, Kirby and Don went ahead to Halse Farm, so that someone could pick up a car and call for me at Wheddon Cross (where I stayed for B&B), then take me to the Minehead hospital (see also general report of week-end by John). Richard, Mary and Bob cycled with me to Wheddon Cross - this proved to be very heavy going, due to heavy rain combined with steep hills some of which were very long.

Thank you to everyone for taking part on this ride, but most of all a big thank you for your kind support after my fall.

John Rowland: Four of us, (John, Geoff & Penny and Sarah) set out from Halse Farm and headed up over the nearby hill crossing the Dulverton - Exford road before dropping down for a mile and a half through long wet grass covered fields and a difficult rocky track to the Barle River, to negotiate the Tarr Steps. Here Geoff distinguished himself by fording with his bottom bracket underwater and almost coming off as he bumped his way some 30 yards over the stony river bottom. The climb up the far bank took half an hour pushing most of the way up the virtually 45 degree slope. Gradually we began to contour so riding once more we headed north to Withypool eventually picking up the metalled road from Westwater Farm. It had taken us nearly 2 hours to complete the 7 miles from the campsite, so coffee and cake were most welcome.

Heading west and climbing along the North Molton road after a few miles we turned off for Woolacombe Farm and Horsen Hill. This meant a gradual climb of a few hundred feet on rough track then grassy fields and finally a broken wet peaty stretch that took us over the crest and down towards the Barle again. Lunch followed taking shelter in a barn from the now persistent rain. Down to the river again using a rather pleasing fast cart track until we came across a deep ford. Fortunately there was a footbridge just 100 yards upstream. The route then paralleled the river for a while before climbing away over open moorland to join other tracks finishing on a road that eventually led back to Withypool. Another long fast descent! It was during this stage that, with a surprisingly loud metallic clunk, Geoff's saddle bolt sheared resulting in him having to stand on his pedals for the rest of the day. A tiring challenge! Thus he was as grateful as the rest of us to return to the morning's café for more refreshment and a chance to dry out in the warm atmosphere. As ever with these off road rides, time was not on our side. So we then confined ourselves to a road route climbing steeply up to Comer's Cross before heading towards Dulverton and turning off to reverse the morning route over the Halse Hill common back to the camp site. Thoroughly wet and well exercised we were looking forward to our evening in the Badger's Holt pub. 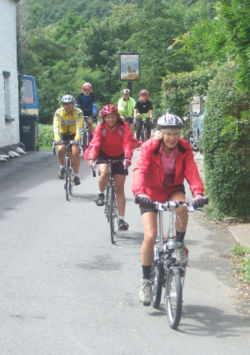 Penny leading past the Staghunters Inn 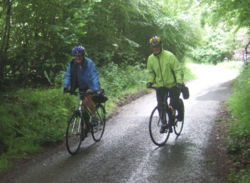 Sarah and Don before the sun got out

Kirby James: After an extremely wet Saturday I was not particularly looking forward to leading the Sunday ride. Initially I was reassured to find a small contingent of Marines guarding my bed overnight. I first thought that this was for my security ... but later realised that it had been organised to prevent me from escaping my leadership duties.

Sunday dawned wet ... but by the time our party (Geoff and Penny, Richard and Mary, Diane, Don, Jill, Sarah and Kirby) had assembled ... the rain had eased somewhat. We climbed up to Spire Cross and turned to cross Winsford Hill before dropping down to Boeveys Cafe in Simonsbath. We arrived at the same time as a group of veteran cars and their almost equally veteran owners. Boeveys specialise in gigantic tea cakes ... and the more prudent amongst us shared one between two. Whilst we were resting Bob, John and Alan turned up by car to join us. 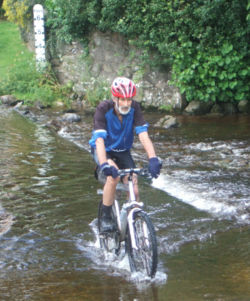 Reluctantly we dragged ourselves away. As we headed north over Brendon Common we were rewarded by gin clear views across the moor as far as the coast near Combe Martin. We turned to descend steeply to follow the East Lyn Valley through Brendon ... then climbed alongside the Oare towards the summit of Porlock Hill. Geoff bravely rode through quite a deep ford and was the only one of us to ride up the 1 in 4 hills on route ... these hills were also giving a good deal of trouble to several car borne tourists who seemed never to have encountered steep hills before. At the top we followed Sustran’s NCN Route 3 down the old toll road. Although in future I will take the new toll road which has a much better surface and is better graded. 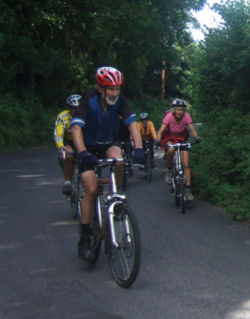 In Porlock itself we raided the local store and visited the nearby churchyard for a lunch break. The constant hills were beginning to tell ...and several inquired whether there was a flat route back to the campsite (err no ... this is Exmoor!).

After lunch we crossed Packhouse Bridge to Luccombe then began the long ascent of Dunkery Hill. After averting a mutiny from a group who wanted to return via Wheddon Cross we completed the climb then descended quickly to Exford for afternoon tea in the pub. All that was left to do was to climb back over Winsford Hill and return to the campsite.

After such a wet Saturday it was fantastic to take our time enjoying a rare sunny day cycling in one of the most attractive parts of the country. Thank you John for organising such a memorable weekend.