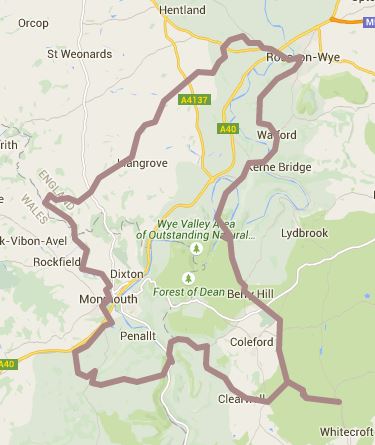 With only a subtle hint of wariness in his voice, Kirby informed us that the ride would not only involve two significant hills but would also take us into Wales. Before he had finished his sentence, Glenis broke into what sounded like fluent Welsh! Her hidden talents continue to amaze me although no-one knows for sure what she said and can only surmise that she knows ‘can you tell me where the nearest bike shop is’ in several languages, just in case? So, pedalling on (uphill, but not ‘the hill’) in a north westerly direction we cross the River Wye and in to Wales, over an interesting old railway bridge at the once busy port of Redbrook which rose and turned in stages temporarily allowing us to forget the two chevron hill which lay ahead on the Welsh bank.

As always, the climbs are worth the views so we stopped to enjoy the rolling panoramic views before heading for Monmouth. Perhaps it was the effort so early in the ride that almost mislaid us into a Care Village. The necessary ‘U’ turn in their entrance road didn’t happen as swiftly as it should with some riders looking over their shoulders a little regretfully as we pedalled away! Monmouth proved to be full of excellent cafes, so to maximise potential we spread ourselves around them all! 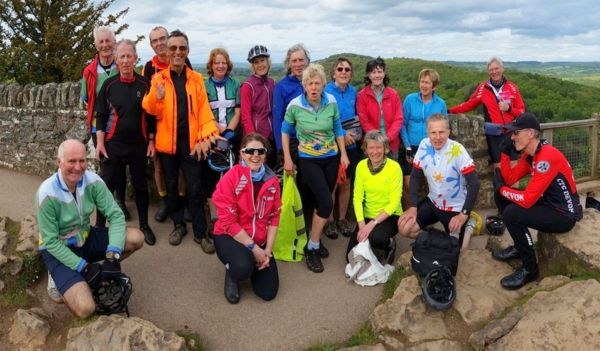 Monmouth is famous for its link with Charles Rolls (co-founder of Rolls Royce) as depicted by a statue of him holding not a car, but an aeroplane! Turns out his real passion was aviation but he tragically became the first Briton to be killed in an aeronautical accident using powered craft. In 1897 he became Captain of Cambridge University Bicycle Club but that was before joining the misnamed ‘Self Propelled Traffic Association’ which was actually about motor cars!

More hills to push on to Ross on Wye where sitting on the banks of the Wye at a canoeists ‘Portage Point’ in the sunshine was most welcome. The ‘second’ hill challenged us at Symonds Yat where we were overtaken by young fresh things half way through their 400km Audax from Buckinghamshire!! The landscape from the top was quite something with clear views of the loop of the old river and a delightful sighting of one of the pair of Peregrines nesting on a rock face. Cups of tea at the top with more cake helped to propel us the last few miles and a fast final sweep back to Parkend. A wonderful day out!

Day 2 of a Great Weekend in the Forest of Dean

Having paid any bills and loading the cars, we set off from the Fountain Inn at around 09.30. Tim was leader of the day, and Judy was at the rear. We just rounded the first turn to find Tim was waiting to see we were all fine and keeping an eye on us all. We were on route to our first coffee stop, at Harts Barn Flower and Craft Centre. 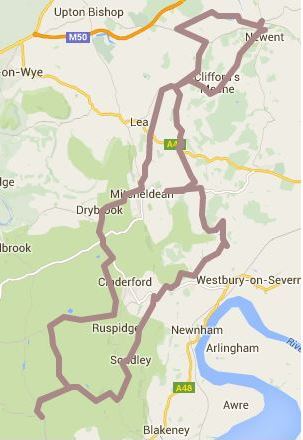 As we made our way up the first climb from Parkend, we came across a flock of sheep walking all over the road, time for a short stop you might say. We carried on and a short while later came across a lovely wooded area, with blue bells as far as the eye could see, around the area of Staple Edge Wood. Having cleared the top of the hill we found the road spread before us and had a great decent. While making our way and passing the hamlet of Little Dean, we came across Popes Hill and a beautiful view over the River Seven, where there was a short stop to take in the sights. By now coffee was calling and so made our way to Harts Barn arriving a little time later.

Having had coffee, we set off for the small town of Newent, with good roads and a few hills we made good progress. While making our way to Newent we got very spread out during a long descent. David, Tim and Ian were ahead and came across a small ford. As Tim went through the ford, he found the bottom very slippery and called to David to take care, but it was too! late and to his dismay with a slip and a bang he found himself over and in the Ford. Having cleared the Ford, we kept going and after making a couple of turns found that Judy, Glenis and Roy were missing. Having made contact, Tim shot off to find them, only to find they had made a short cut missing us all, that is, until we bumped into them further down the road. Tim was now out looking for them and had to be dragged back. At last we were all together and made our way, arriving for lunch in the local park at the side of the lovely Newent Lake.

After lunch we looked for a plaque in the town, Stephanie wanted to find out the date that the canal had closed and the year the railway opened, as the railway followed the river bed. At the time we could not find the foresaid plaque, as it appears the plaque had become overgrown and was on the busy B2215.

We decided to carry on, and make our way to the town of Dry Brook. With over 30 miles under our belts, and now looking for afternoon tea, we were making a good pace to our tea stop. I then started to feel the energy drain from my legs, and after starting another climb, had to stop to top up my sugars. On arriving in the town of Dry Brook, and not finding any tea rooms (very Dry Brook?). We decided to push on to the finish, with the kind promise from Stephanie, that we could all have tea and cakes in the bunk house at the finish. After another great descent, we arrived back at the fountain Inn and finished the day with tea and cakes with Stephanie, and the kind help of Glenis and Judy with their own supply of cakes. What a great finish to the weekend. 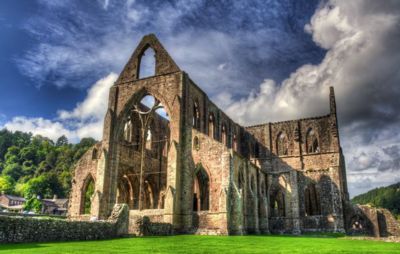 The venue was the Fountain Inn which offered hotel rooms and a bunk house lodge with full facilities and a secure bike area. The Fountain Inn is at OS Map Sheet 162 GR 616 078 in the village of Parkend virtually alongside the B4324.