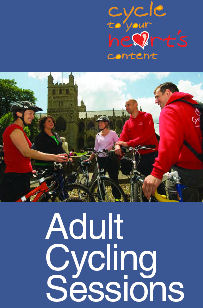 Cycling Exeter organise regular cycle courses targeted at adults who are either returning to cycling or who are taking up cycling for the first time. These Adult Cycling Sessions are run from the Quay in Exeter. For £30 participants get eight 2-hour training sessions which includes both instruction and bike hire. The sessions are jointly sponsored by Cycle Exeter and the Devon NHS Primary Care Trust.

The courses are run on the Exe Estuary Trail and on cycle routes near the city centre. During each two hour session the riders cover 6 to 8 miles.

One issue is that after attending the courses some riders still lack the confidence to undertake rides on their own. CTC Exeter has been in discussion with Cycle Exeter about offering local leisure rides to graduates of the courses. These rides will offer quiet routes to destinations such as cafes. A trial ride from the Quay to Woodbury was organised by Cathy and Arthur Civill - see report below.

Extract from the Exmouth Journal's report

Cathy and Arthur Civill organised the first of a number of rides targeted at graduates of Cycle Exeter's Adult Cycle Sessions and other 'beginning cyclists'.

The ride led from the Quay in Exeter to Woodbury where riders were able to enjoy a cream tea and watch bell-ringers in action. 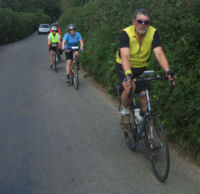 Robin, Janet and Debbie near Slapton

Audaxes are generally ridden at a somewhat higher pace than the normal CTC club runs ... but more slowly than cyclosportives. Thus as well as being satisfying in their own right they are a stepping stone for people wishing to gain a higher degree of fitness.

A report on the 100 km ride is available on-line. 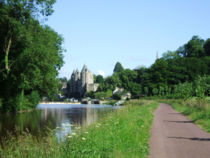 After returning from their five week tour of France Marylin and Roger have found time to sort out some of their photos and write a report on their adventures.

On their cycle camping trip they experienced more than their fair share of the miserable wet weather which has affected north-western Europe for much of this summer. Nevertheless their photos have captured much of the charm of some lesser known parts of France.

Their report and photos are on-line here. 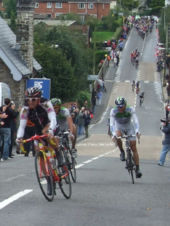 The Tour of Britain returned to the South West on Tuesday 9th September when the 185 km Stage 3 ran from Chard to Burnham-on-Sea.

The route contained three King of the Mountain sections which proved to be ideal for spectators.

I chose to hide in a cafe in South Molton to await the cavalcade. Despite the damp weather crowds filled the streets of this small market town. The local schools were allowed to watch the ride and all had been provided with a Devon flag to wave. A group of infants near me were really excited and cheered everything that passed - motor bikes, ambulances, old ladies in invalid carriages, etc.

We were rewarded by seeing Geoffroy Lequatre on his breakaway ... which at this point gave him a lead of around 5 minutes. Geoffroy was to become the winner of the overall event.

On the back of the Tour Somerset County Council have established a new Exmoor Family Cycle Route. The route is over 60 miles long and it is expected that families will take several days to complete the route. 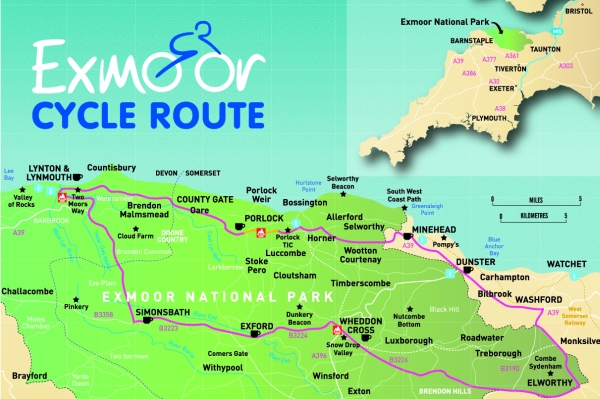 Hope Cove in the sunshine

Periodically CTC Exeter join neighbouring sections for joint rides. As well as giving us the opportunity to met fellow cyclists these rides take us to parts of Devon most of us haven't explored before and also allow us to experience new coffee stops.

In September South Hams CTC hosted a ride to Hope Cove in brilliant sunshine. Nicole Pethybridge's report on this enjoyable ride - which included a coffee stop at the excellent Avon Mill - is on-line 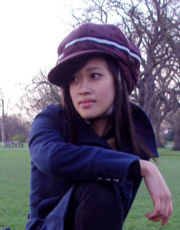 Much to my surprise the fashion item in last month's newsletter proved to be the most popular item. So here is some more fashion news ...

These hats fits over the helmet and are designed to create greater awareness on the road whilst remaining glamorous on her bicycle.

Behavioural reports show that drivers would give a cyclist more space if they are not wearing a helmet as they appear more vulnerable. This hat disguises the helmet through accessorising so that drivers are still conscious of those who wear helmets.

The reflective material also enhances the cyclists’ presence during the night and it can be easily replaced with a different style to suit the wearers outfit.

You can purchase the Cycle Head Dress at £50.

The Cycle Head Dress has been designed by Hi1 Designs and is available from Velorution in Central London.

Exmouth - Lympstone: Since this section opened at the beginning of the year it has attracted an average of 10,000 cycle trips per month (approx. 300 per day).

The exposed strata alongside the trial allows water egress which has caused a number of minor landslips. These have now been cleared. During the trail's design aggressive landscaping was precluded and consideration is now being given to a longer term environmental friendly solution.

On the 19th September Cycling England staff rode along this section of the trail and were briefed on the work of Cycle Exeter.

Lympstone - Exton: A new fence has been constructed which separates the trail from the rail line. Work has begun on the footings for the new boardwalk which will span the boggy sections in front of Nutwell Court. Completion is scheduled for Autumn 2009.

Exton - Topsham: Planning consent was obtained in Spring 2008 but work is not planned to begin until 2010. Some issues with land ownership still have to be unravelled. Discussions are underway with the RSPB about the design and construction of two bird viewing platforms which will be constructed on Goosemoor as part of the scheme.

A new cycle route which will link the Exe Estuary Trail with Ebford and the new Cycle path from Dart's Farm to the Clyst Bridge in Topsham is under development.

In the short term the existing footpath which runs from just opposite Dart's Farm to the rear of Tremlett's Boatyard will be upgraded to a shared use path and the lane which runs from the boatyard east to the A 376 at Ebford is being re-surfaced. In Ebford a new Pelican crossing is being constructed. This will help to provide a safer route from Exeter to Woodbury.

This new route will eventually link directly to the Estuary Trail between the new Clyst Bridge and Exton village.

Bridge Road - Turf Locks: Parts of this route are currently being re-surfaced. New cycle sculptures in the shape of Whimbrels (a bird), to which you can lock your bike, have been installed at Turf Locks.

Turf Locks - Powderham Church: Discussion have taken place with the Environment Agency, Natural England, Lord Devon, the Diocese of Exeter and Railtrack but it seems that there is no easy solution which meets all their concerns. Currently the plan is to submit an application involving a route along the flood plain (below the estuary wall) and a rail bridge.

Estuary Road to Starcross: A new section from where Estuary Road joins the A379 down to Starcross Station has been completed. Here a new signalled crossing will lead to the back road through Starcross.

Starcross to Cockwood: This section was largely completed during the summer. The final activity is to install a new signalled crossing just north of Cockwood.

In the past there has been some confusion about who to contact if you experience trouble with Stagecoach buses. If you do experience an incident you should write to Richard McAlister, Operations Manager, Stagecoach Devon, Belgrave Road, Exeter, Devon, EX1 2LB tel: 01392 427 711 with a copy to Zsolt Schuller, Cycle Exeter, Devon County Council, Lucombe House, Topsham Road, Exeter, EX2 4QW tel: 01392 382 811. If possible you should report the time and location of the incident, and the number or route of the bus so that the driver can be identified.

Devon County Council now host the official web site for the Exeter Cycle Forum. This official site contains minutes from recent meetings and other material relating to the Forum.

Most First Great Western trains are limited to carrying two cycles. If you would like to arrange to take more you can email fgwcyclesexeter@firstgroup.com 24 hours before your journey to ask whether arrangement can be made to carry your bikes. I'd be very interested to know if this works!

A new off-road route between Broadclyst and Killerton is being explored by Sustrans and the National Trust. The route will follow the line of an existing footpath and cross the motorway using the current footbridge.