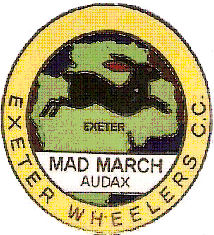 If you would like to try the challenge of riding a 100 km Audax, Pippa Wheeler is organising a 100 km ride - the 'Mad March Exeter Excursion' - on Sunday 8 March 2009 starting from Exeter. An entry form can be found on the Audax UK web site.

A report on last year's ride is on-line here 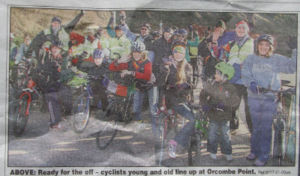 After having started in Totnes the Transition Town movement is rapidly spreading across the country.

They are 'dedicated to finding ways of tackling the dual crisis of Peak Oil and Climate Change'.

Just after Xmas the Exmouth Transition Town group organised an 8 mile bike ride from Orcombe Point in Exmouth around the coast to Lympstone. The ride attracted over 50 cyclists of all ages - including some local CTC and Teign Valley Pedal Bashers' members.

Last Summer a planning application was submitted to Dartmoor National Park Authority for a new shared use trail from Bovey Tracey to Moretonhampstead. During the consultation period 278 letters or emails were received in support of the application and just 39 against.

The good news is that the application has been approved.

The trail will be open to cyclists, walkers, and horse riders, and will use much of the disused rail line which runs up the Wray Valley through Lustleigh. The direct route from Bovey to Moretonhampstead involves the busy A382 which is a narrow winding road which presents dangers even to experienced cyclists. The alternatives involve climbing up through Manaton and North Bovey or climbing up past the Kennick Reservoirs. Neither route is suitable for youngsters or less fit cyclists.

In 2001 Harveys - the map makers - in collaboration with the Dartmoor National Park Authority produced a 1:40,000 map of the Moor showing the approved off road cycle routes. Routes were colour coded to indicate difficulty. The original map has now sold out and the Authority have commissioned a revision which should be available in April 2009.

They will be including new paths on which off-road cycling is permitted and on the rear of the map will print a 1:55,000 map of the wider area - showing routes from Exeter and Plymouth to and from the Park.

For those interested the details are on-line as part of a much larger document - the relevant bits are on pages 33-36.

Extract from the Dartmoor for Off-road Cyclists Map 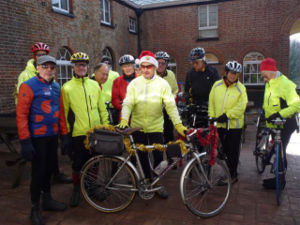 Mike and Liz Bowden organised CTC Exeter's 2008 Christmas lunch which was held at the Red Lion in Broadclyst on the 14 December. The event attracted 42 members - some of whom we've not seen since last year!

For the more energetic Exeter members Mike first led a morning ride from Broadclyst out to Escot for coffee, before returning (just) in time for the lunch. Mike really entered into the spirit of the occasion - by dressing up both his bike and himself!

The food proved to be of a high standard - as did the company.

Many thanks to Mike and Liz for organising such an excellent event.

In recent years CTC Exeter has offered Wednesday evening rides during the summer months. CTC Exeter is now offering regular Wednesday evening rides year round. The destination is a pub in the East Devon area and two starts are offered - Exeter (outside the Pinhoe shops) or Honiton (Hayne Lane junction with old A30 ). Rides normally start at 7.00 pm and return home by 10.30 pm. The total distance is usually between 15 and 20 miles.

Information about the rides is on-line. If you would like to know more, or want to check there is someone leaving from your start point please email pubrun@hotmail.com or phone 01392 464303.

£5M of the money that was raised by the sale of Exeter Airport is being invested in cycle paths in Devon. The main routes to benefit are

The Axe Valley Pedallers (AVP) featured in a video report on this news which was transmitted on BBC1's Spotlight programme last week. The report featured AVP's Alistair Cope and Cllr Margaret Rogers - both of whom are strong supporters of cycling in Devon. For those who missed the broadcast it can be viewed on-line 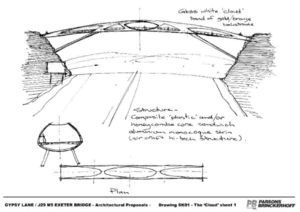 Devon County Council are proposing two new crossings of the M5. These comprise a cycle route around Sandygate Roundabout and a new bridge across the motorway at Gypsy Hill, north of the Honiton Road.

If a funding bid by Devon County Council receives Government approval, work will start on Sandygate Roundabout in May, with phased completion by early next year. This will include a toucan crossing of the Sidmouth Road dual carriageway to reach the Blue Ball. Work on the new bridge at Gypsy Hill could take 2 years to complete, in conjunction with the new Science Park. Further details are available on Devon County Council's web site

Roy Russell has recently been appointed CTC Right to Ride Representative for Exeter. The Right to Ride Network comprises about 400 volunteers nationally who campaign for better cycling conditions and promote CTC's Policies. So if you want to know anything about proposals to improve cycling in Exeter, or have any suggestions, please contact him (Roy.Russell@blueyonder.co.uk). Further details about Right to Ride can be found here. 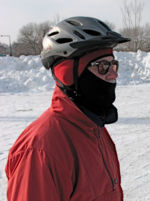 Over the last month parts of Devon have experienced temperatures as low as -9°C which have led to many complaints about cold feet, hands and noses.

But spare a thought for cyclists in Minneapolis-St Paul. Last week temperatures dropped to -24°C with wind chills in the range -37°C to -43°C. Makes Devon seem positively balmy!

Not surprisingly balaclavas are de-rigueur.

On several occasions in recent weeks I have cycled from Exmouth to the Quay in Exeter. On icy mornings the most dangerous part of the journey has been the cycle path alongside the canal from Bridge Road to the Quay.

The Council have confirmed that their policy is NOT to grit cycle paths. The exception is that some of the bridges (Cricklepit Bridge, Salmonpool Bridge), which are prone to icing even when neighbouring paths aren't icy, will be gritted.

Several local employers allow their staff to purchase bikes at attractive discounts through the Cycle to Work Scheme.

At the Royal Devon and Exeter Hospital over 200 staff have taken advantage of this scheme.

Staff at local businesses have been found to have been using the park and ride car parks because of limited parking on their employer's site. This means that spaces are not available for genuine park and ride users. Such users risk a fine.

Some cyclists drive from the country and use the park and ride car parks and then cycle into the city. This is considered to be a legitimate use of the park & ride car parks.

A new scheme is being introduced this month which will provide such genuine park & cycle users with a permit which can be displayed on their car's windscreen. Daily, weekly and annual permits will be available free from the office on each site. 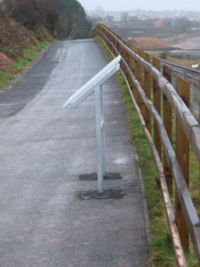 Exmouth - Lympstone: A significant number of people have complained about the siting of a new information board on the path. The sign blocks part of the path and is especially difficult to see at night. An order has been issued to move the sign.

Lympstone - Exton: Construction is underway. Work is well underway constructing the new sections of boardwalk in front of Nutwell Court. Completion is scheduled for Autumn 2009.

Turf Locks - Powderham Church: A Planning Application was submitted in December for the Turf Locks to Powderham section of the Exe Estuary Trail - with comments being accepted until 8th January. Full details of the proposal are on-line. The application includes a new bridge over the high speed rail line. This bridge has caused some concern to local residents because of its potential impact on estuary views.

By the closing date for comments on the application, 160 letters or emails of support had been received and only 6 objections. The objectors include the Earl of Devon, the Diocese of Exeter and the local landowner.

The planning committee meets in mid-March to discuss the application - but it is likely to adjourn for a site visit.

Estuary Road: A traffic survey has shown that the traffic calming measures along this section have caused a slight reduction in traffic volumes but little impact on average speeds. A debate continues on what is the optimum solution for this section of the Trail. This will become a bigger issue when the Turf Locks to Powderham link is complete and the volume of cyclists increases.