Some of you will recall Debbie Ironside-Smith's London to Paris charity ride last year when she raised over £4,000 for MS Research. Over the next twelve months Debbie is providing advice to a team of cyclists who are raising funds for the Exeter Royal Academy for Deaf Education in Topsham Road, Exeter. Several Academy staff and parents are taking part - but they have space for some additional riders. The group plan to train over the next 12 months using a mixture of special group rides together with some CTC and Audax rides.

Amanda Denham is the Head of Fundraising at the Academy and - showing her level of commitment - both she and her partner Anthoney will be taking part. Amanda is following Debbie's example and is producing a very entertaining blog describing her (and Anthoney's) training.

The ride will be taking place from Wednesday 28 July to Sunday 1 August 2010 and all the money will be going towards equipment for deaf students taking part in the Duke of Edinburgh Awards Scheme.

More details of the ride are available on-line. If you are interested in taking part or would like additional information about the ride please contact Amanda by email. 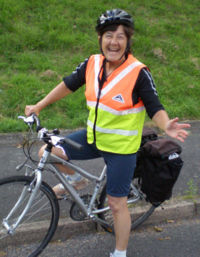 One of our Coffee Potters - Laura Conyngham - together with her husband Gerald - are cycling 140 miles from Stansted in Essex to Copenhagen on 9th 16th December to take part in the International Conference on Climate Change. This could be the last chance the world has to act decisively to reduce global warming.

They intend to raise a minimum of £3,800 for Christian Aid and they’ll be delivering carbon-cutting pledges from our local community direct to the international conference.

Stansted to Harwich will be 65 miles of cycling in one day. We'll relax a bit on the ferry to Esbjerg. Then in Denmark we do 50 miles one day and 25 the next. We come back by coach and ferry.

Christian Aid is a charity we both believe in and support. Each year, we collect door-to-door for Christian Aid Week. For the funeral collection of Harry, our 4 year old son, who died of leukaemia in 1990, we chose Christian Aid. This charity challenges poverty and injustice, which account for the deaths of millions.

Two years ago I took part, for one day, in Christian Aid's Cut the Carbon March and heard first hand from the international marchers about suffering in their communities from the effects of climate change; from Elisee from Bukina Faso - where there is very little and uncertain rain - I heard how his community has been helped by Christian Aid to develop techniques to conserve water in rock channels. Now they are growing enough to feed themselves.

I also heard from Dwijen from Bangladesh, where there is flooding. There Christian Aid has introduced an imaginative project to enable people to switch to farming ducks. Not only do ducks thrive in a flooded landscape, they also help to keep the insect population down while fertilising the rice fields.

Not content with cycling to Copenhagen ... Laura and a group of fellow Quakers are also organising a cycle ride to support the 10-10 climate change campaign to reduce our own carbon footprint by 10% by 2010.

The ride will be taking place on Saturday 10th October starting at 11:30 at the Blackboy Road Roundabout and finishing at the St Thomas Pleasure Ground play area off Cowick Street 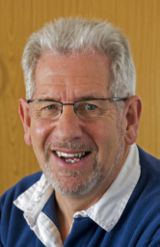 This year's Devon CTC dinner will be held on Saturday 28th November at the Lord Haldon Hotel near Dunchideock. The Torbay Section are organising the event with Graham Brodie taking the lead.

Graham has secured Adam Hart-Davis (a resident of the South Hams) as the speaker this year.

Many of you will recall Adam's TV series on Science in which he traveled from location to location (including Starcross) on a series of outrageous bikes.

The dinner will cost £20 per person and bookings can be made on this form through your local secretary or direct to Graham. 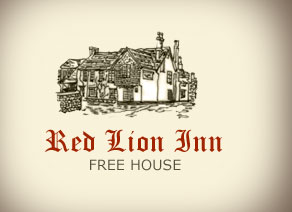 As noted above CTC Devon are having a Christmas meal ...

On Sunday 6th December Don and Iris Buteux are organising the CTC Exeter Christmas Lunch at the Red Lion in Broadclyst (alongside the church). Contact Don by phone (01395 274 069) or email if you would like to come.

Just over a week later ... on Wednesday 16th December ... Sarah Britton and Ian Hennessey are laying on an evening meal for the the mid week (Wednesday) riders. If you would like to book a place please contact Sarah direct. Ominously there will be no Wednesday evening rides for the two weeks following the dinner!

And finally ... on the following day ... Thursday 17th December Pete Luxton is holding the Coffee Potters' lunch at the Willand Restaurant. Contact Pete (01392 841 373) if you would like to come. 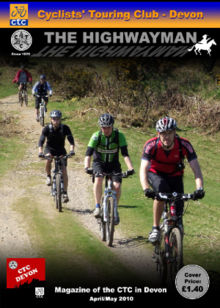 A reminder that renewals are due for our local CTC cycling magazine .. the Highwayman.

A subscription means that you will receive ten copies of the magazine over the next twelve months ... and as well as providing up-to-date news about recent activities ... will ensure that you will be the first to learn about up coming events such as Geoff Sharpe's trips to France (and beyond!?).

In the last year the magazine's appearance has been completely overhauled by the introduction of colour photographic covers and by the use of electronic publishing techniques (although the editor has been known to accept copy in handwritten form). Tom Dunn is the editor and Jean Brierly is responsible for layout, production and financial issues.

Thus far Graham Brodie from the Torbay Group has monopolised the photographs used for the cover ... but the production team are keen to source images from other members and groups. Jean and Tom would be very happy to receive suitable photographs ... preferably in portrait format ... will you be the first to break Graham's stranglehold?

If you have not already renewed ... a subscription form can be downloaded here. 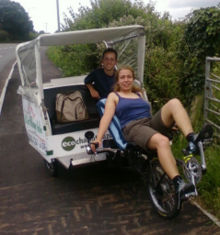 Cyclists in Devon are used to seeing 'end-to-enders' passing through the county.

In July a cycle rickshaw was spotted in Broadclyst en-route from Lands End to Lowestoft. The rickshaw was very heavy and had been nicknamed the EcoChariot.

Lianna was bravely pedaling this monster whilst ... rather unfairly ... Simon seemed to be relaxing in the back inspecting their map for suitable lunch stops.

Under interrogation it turned out that they were raising money for Action Village India.

If you would like to learn more about their adventures ... including the front wheel disintegrating on the first day ... and their mention in BBC traffic reports ... please visit their web site. 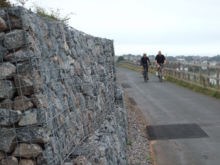 Work to stabilise the loose slopes is now complete.

Now I can take my Brompton along the path without worrying about it being submerged in a landslip!

A section of the route (on-road) along Mud Bank Lane into Exmouth is being closed for eight weeks this Autumn - but the route is being diverted around neighbouring streets.

The work on this section has been divided into three contracts. The longest section ... from Exton Station to Nutwell Court has been opened ... but until the final two sections are complete it will not be possible to cycle into Lympstone. Thus at the moment ... after cycling past the Commando Training Centre ... you will have to turn around and retrace your steps back to the start.

The final two sections ... providing access to Lympstone Station and the village ... should be complete early in the new year ... with the official opening being around Easter.

A short new section of path is being constructed at Turf, to allow cyclists to bypass the lock gates when maintenance work is taking place.

The markings and islands which were installed two years ago have been removed to be replaced by a shared 20 mph zone.