The completed section of the Exe Estuary Trail from Lympstone to Exton will be officially opened on Friday 28th May.

On the following day (Saturday 29th May) Devon County Council are holding a cycle fun day on the King George Playing Fields in Exmouth with rides to Exton. Click here for details 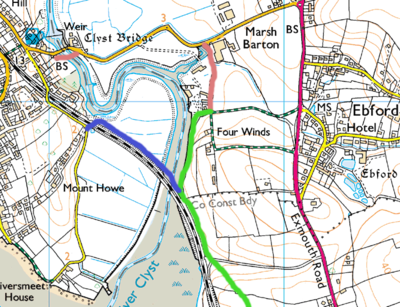 Construction of the new cycle route along the existing footpath opposite Dart's Farm is now complete, as shown on the adjacent map in pink. This link opens up a quieter route for cyclists traveling from Topsham to Woodbury and beyond.

A further link is proposed from the southern end of this path, near Odhams Wharf, to join the Exe Estuary Trail at the mouth of the Clyst (shown in green). A Planning Application is expected soon, with completion programmed this winter. This will create a link from Dart's Farm through to the Exe Estuary Trail that will be open all the way to Exmouth.

The Tour Series organisers, Devon County Council and Exeter City Council have announced that the city centre will host Round 4 of the 2010 Tour Series. The Tour Series event is set to return to Exeter on Thursday 3 June during the half term school holidays.

The Tour Series is a programme of televised City Centre cycle races with 50 professionals competing in 10 teams on a thrills and spills circuit. The route is the same as last year, along High Street, Queen Street and New North Road.

The race is taking place in the evening, but from the early afternoon a festival atmosphere will be created in the City with displays, stalls, activities and mini races for children and the general public. Click here for more details

Ride to the Coast - Saturday 12 June 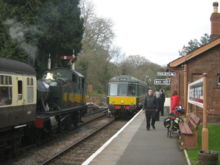 Exeter CTC are organising a 100 km ride from Cullompton to Watchet on the Bristol Channel on 12 June.

The route follows part of the West Somerset Railway. 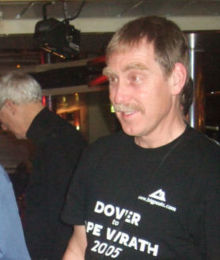 Many of you will have met Graham Brodie cycling around Devon. Graham is well known for building the CTC Devon Web Site, organising events such as the Devon Delight Audax and the Devon Dirt Off-road ride ... as well as keeping local BBC TV and Radio on the air.

In June Graham is setting off to cycle right around the UK to raise money for Shelter Box. Shelter Box is an international disaster relief charity based in the West Country which delivers emergency shelter, warmth and dignity to people affected by disaster worldwide. 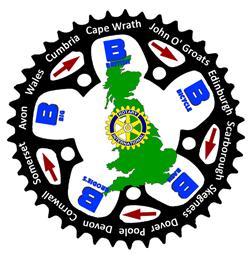 "I'm off on my travels again - this time the four corners of the British mainland in just under a month - an average of about 100 miles per day. This is fulfilling a life ambition, but I'd also like to raise enough money to buy at least 6 shelter boxes - that's shelter for 60 people! (Each box contains a ten man tent, utensils and tools which can vary depending on the destination of the box.)"

"Donating through JustGiving is simple, fast and totally secure. Your details are safe with Just Giving – they’ll never sell them on or send unwanted emails. Once you donate, they’ll send your money directly to the charity and make sure Gift Aid is reclaimed on every eligible donation by a UK taxpayer. So it’s the most efficient way to donate - I raise more, whilst saving time and cutting costs for the charity."

If you would like to support Graham's efforts please visit his Justgiving web site.

Following Grahams ride, "The Great Tour" is aiming to circumnavigate Britain in 64 days, starting and finishing in Seaton. If you'd like to join in a limited number of places are available. Click here for details. 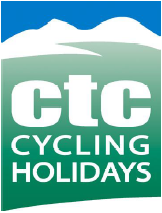 The Tour of Britain have announced details of a series of three charity rides which will take place a week before the Tour visits the South West. They say

This September, cycling fans across the UK will have the chance to take part in Britain's best bike race. Once again The Tour of Britain has teamed up with The Prostate Cancer Charity to deliver a unique cycling experience for you to ride in the tyre tracks of the world’s best professionals.

The South West stage offers a stunning, coast to coast route from Minehead to Teignmouth. Featuring some of the best of British scenery, this is a very hard but hugely rewarding 175km monster of a ride. The route climbs almost 3000m as it traverses the South West. Graham Jones our Route Director thinks this route will present The Tour of Britain peloton with a tough ask, so any keen sportive riders looking for this year's 'Big One' need look no further than this ride. Sign up now.

Cycle Exeter has been making awards to Exeter businesses for encouraging their staff to cycle. 31 Exeter-based companies are to receive 'Business is Better by Bike' Awards.

The award winners will receive gold, silver and bronze award logos which they can display on their website and on company materials.

The Met Office gained the highest score in attaining its Gold Award for its facilities, incentives, promotion and events for staff who cycle.

"We are very pleased to receive this award, and would like to thank Devon County Council for all their support. Our cycle facilities benefit the environment and the many members of our staff who regularly cycle to work whatever the weather!"

Other top-scoring organisations were the Environment Agency, in the silver award category, and joint highest scorers in the bronze award category were Atkins and NHS Devon.

The complete route from Exmouth to Exton will be open at the end of May. See above for details of the remaining section to Topsham.

Work expected to start on site next year.

Work expected to start on this path through the fields next year.