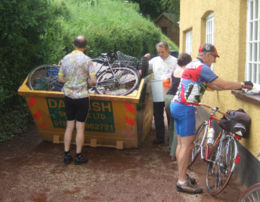 I was down to lead a ride from Exminster to Dawlish – which didn’t sound particularly interesting (who chooses these routes?). Anyway putting a brave face on it I fetched up at the start to find regulars Mike, Debbie, Tom, and Chris together with a new young lady, Diane, who was taking a step up from the Coffee Pots to try a Sunday ride for the first time.

The weather the previous week had been exceptionally wet with persistent thundery showers - but it was dry as we headed up Days Pottles Lane towards Kenn. From Kenn I led up to Hydon Common where the lane was almost impassable due to mud, sand and water on the road. Debbie told me that her bike had been serviced the previous day and had started out clean. I headed for lower ground - but if anything the roads got worse. At the Old House in Chiverstone Road we sadly found that Debbie’s friends Rolf and Jackie had been flooded out on the Friday night and were now stoically dumping their ruined possessions into a skip. Amongst the debris were three Dutch roadsters and Mike Bowden asked if he could rescue a sprung leather saddle. Leaving with our commiserations (and booty) we continued to Powderham via Littercombe Lane. 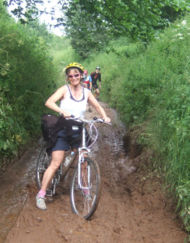 Diane emerging from the mud

Chris and Mike turned round at this point but we were joined by Cath, Arthur and Jenny and her p*nct*re. I pointed the others in the right direction and I watched amazed as Jenny patched her tube in less than 10 minutes. We then rode the back way through Starcross and caught the others at the top of the climb above Cockwood.

The condition of the roads didn’t improve – after riding through tons of wet mud we came across a medium sized lake – in the far distance the road could be seen continuing – but it wasn’t clear how deep the water was. Jenny, who works for the Environment Agency, and who should know about floods, rode on through. It was only later we realised that she was wearing SPD sandals and was unconcerned about getting her feet wet. The rest of us now felt we had to follow – fortunately we all got through without a dunking. Debbie told me for the third time that her bike had been serviced the day before and had started out clean. After crossing the lake we headed down Secmanton Lane to rejoin the coast road. However I noticed that the group was getting distinctly ratty so I decided to offer them a choice – they could either cycle direct to Dawlish – or try the NCN path along the cliffs. The group split in two and Jenny took the opportunity to escape and to meet up with Tom who was keeping drier than us whilst canoeing in the Exe. 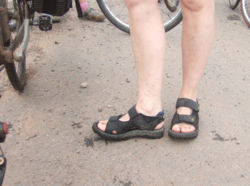 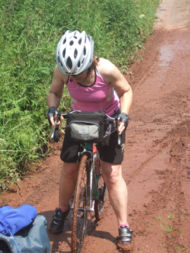 We reassembled again in Dawlish for lunch on the sea front and the mood seemed to lighten somewhat. Afterwards I abandoned the planned climb up Little Haldon and we set off back along Dawlish Water which turned out to be the first dry road we found. Unfortunately this wasn’t to last - as a result of my map reading error - we explored the muddiest recesses of Pitt Farm (several times). Yes Debbie - I did know your bike was serviced yesterday. Eventually we escaped towards Mamhead. From there the return to Exminster was relatively uneventful.

Well done to Diane for completing one of the most challenging rides CTC Exeter can offer. 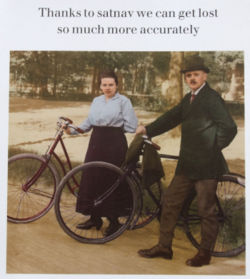 Kirby and lady friend before the ride

PS A petition is circulating requesting that Kirby James be removed from the list of approved leaders – I strongly recommend you sign it.