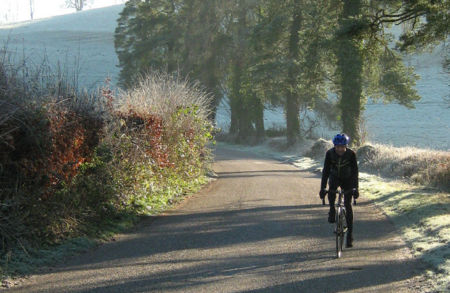 At the start at Sampford Peverell I was wearing a wicking vest, bib-tights, a standard cycling jersey, and a windproof jacket - but I still felt rather cold so I added a fleece – which I assumed I could take off when I warmed up – I couldn't have been more wrong!

Overnight there had been a deep frost but the Met Office forecast that the temperature would rise to a balmy 7°C. Stalwarts Geoff, Penny and Roy were also well wrapped up as we set off. Immediately we were caught by Pete who amazingly had cycled up all the way from Exmouth.

We all climbed up the Lowman Valley with the sun glistening on the frosted fields. Over the top the temperature dropped several degrees as we descended in the shade and over the odd patch of ice towards Bampton. On the way down my gears froze in bottom gear and Roy's chain seized up in the cold. 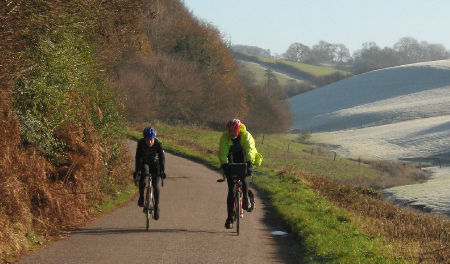 We left our bikes to thaw in the sun opposite the Bampton Bakery as we enjoyed coffee and cakes in the warm. After a long break we reluctantly dragged ourselves outside and fortunately found that our bikes had unfrozen. Pete wisely decided to return directly to Exmouth and the remaining four climbed northwards onto the southern edge of Exmoor. In shady spots ice completely covered the road – and Geoff embarked on a scientific study of the relative grip of bike tyres and cycling shoes. The rest of us walked the icy sections.

At the lunch stop at Wimbleball Reservoir I put on my sixth layer – a waterproof top – and we ate our food in record time to avoid frostbite. 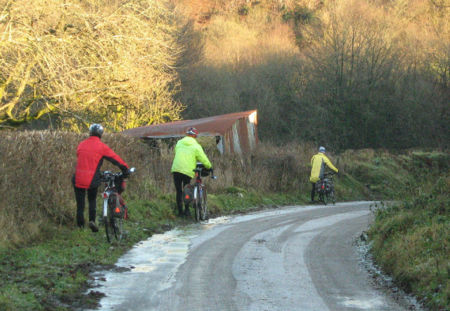 Penny, Geoff and Kirby off road - avoiding the ice

We debated the safest route home and decided to press on with our original route. This took us to over 1,000' and across the icy wastes of Exmoor – we part walked, part rode and partly slithered our way down to Chipstable and Waterrow. On the way Geoff showed how to perform elegant pirouettes in the road (you lower your saddle and keep both feet on the ground), Roy disappeared into a hedge (why?) and I demonstrated how to descend hills backwards.

We eventually picked up the Tiverton-Taunton canal and returned unscathed to Sampford Peverell just as darkness fell. All day the temperature hadn't risen above 3°C.

OK I lied about the partridge.