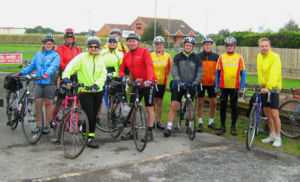 Everyone at the start ...

This was a combined run with Axe Valley Peddlers. We met five of them at Whimple Station another one joining us en route having (as three others had) cycled from Seaton. Fifteen in all, as Exeter was well represented, we took the straightforward route to Kentisbeare then Uffculme for coffee. After a slow start the chat got going with gales of laughter every now and then. By the time we had reached Dulford we made a compact team. Coffee at the Mill sealed the day although afterwards three of Exeter’s team deserted the ride for more pressing priorities. 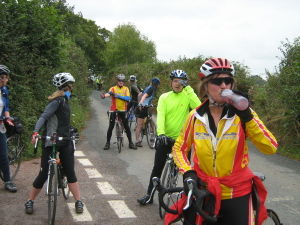 Twelve of us motored on behind Culmstock and Hemyock following the Culm valley on the north side to turn south for Madford and Dunkeswell. This gave us a chance to spend ten minutes walking round the Abbey ruins (a result of the dissolution) and visit the chapel now standing in its ground. An interesting moment for Roger, for a name on a wall plaque was associated with a hotel further north where he had just recently attended a family wedding.

Culture was then put aside as we tackled the only real climb of the day before levelling out and motoring on to Dunkeswell and lunch. Alas the weather had turned and misty rain gently wet us as we sat outside the airport café. This however did not seem to dampen spirits nor shorten the lunch break.

The four that had cycled from Seaton then made their own way home while Exeter members accompanied by the remaining two 'Seatons' headed for Broadhembury, Payhembury, Talaton and Whimple reaching the cars at just before 4pm. Words of goodwill were exchanged and a promise to enjoy another combined run in the not too distant future. We look forward to it.