Did Judy, Tim, and Duck Make it to the Ferry on Time?

... but the latest updates are on-line.

Last week we had a gentle ride to King's in Exmouth ... where we met a wild bunch who had cycled off-road from the depths of East Devon ...

We then agreed to meet them at Otterton Mill for lunch ... the on-road crowd visited Lympstone and then rode round the coast to Exmouth (dealing with two p*nct*r*s en-route), Budleigh and White Bridge ... only to arrive at Otterton to find empty plates. The wild bunch had scoffed their lunch and cleared off!

Last week bike bus management had an Away Day and went off to visit Totnes via the Ditisham Ferry ...

Meanwhile Pauline was rather surprised to find she was leading the Bike Bus from the Quay ....

Pauline: I did lead the bike bus, at least until I reached the Blue Ball when I met up with Glenys and Keith. The one day when I am early enough to go to the quay and no one is there! Anyway, we reached Poltimore, hoping to meet up with Ruth but a couple of locals told us that when some male cyclists swept by, Ruth was swept along with them. So three on the bike bus but lots of people at Cubby Cottage - including Ruth and the mystery males ...

Stephanie: Kind bike bus folk stopped by my house yesterday! Only I wasn’t there ... however, they did manage to seek me out later, you will have to wait for bike bus report to find out where!

The sophisticated Bike Bus intelligence system reveals that Stephanie was in fact in a certain cafe in Honiton - NOT having cycled there!

Last week the Bus went to a very secret location near Payhembury. Some photos of the event have emerged which show large quantities of cake being consumed ... many thanks to Stephanie ... both for surviving 12 months of travel on the Bus and inviting us all round. 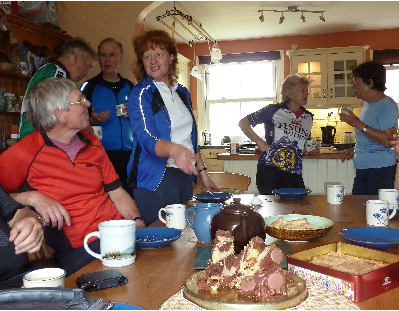 After coffee 12 cyclists staggered down to Budleigh and around the coast to Exmouth for a trip along the new section of cycle path to Ebford.

Tim, Judy and Duck are sending back daily reports on their charity ride - you can see how they are doing.

Last week Keith turned up wearing a very natty cycle jersey featuring the Devon flag. Under close questioning he disclosed that he has started a company to produce custom cycling jerseys. Judy was so impressed she brought one there and then - remember this was only one week after she purchased some new shorts! http://www.halfbb.com

Keith indicated that he would be willing to produce a 'Bike Bus' jersey. He has access to a professional designer - but we will need to sketch out some ideas for what might be on it.e.g a big slice of cake, a cappuccino, a bus, etc. If you can let me have some ideas over the next two weeks - Keith can produce some sample designs - and we can then assess the level of interest.

A reminder that CTC Torbay are organising a 100 km Audax "The Devon Delight" (which visits Exeter) on Sunday 4 July - http://www.ctcdevon.co.uk/delight_info.htm

Two weeks ago fourteen keen Bike Bus members set off for a tour around Brittany. Last week the three survivors made it to Powderham (Don, Kirby and Stephanie) ... what had happened to the others? Stories were told of rotting sea lettuce, submersible routes (whatever they may be), food poisoning, killer algae, falls, watery deaths, ulva lactuca, uncooked quail, red-haired warrior maidens, hydrogen sulphide, very naughty boys and nimble prancing (none of this is made up).

Will the full story ever be told ...

... well surprisingly the answer is yes! ... but you will have to wait until next week to learn the gory details.

Back to Powderham: After coffee Jill, Tim, Judy and Kirby made it to Dawlish for lunch on the beach ... only interrupted by Judy calling in at the bike shop to purchase a decent pair of shorts (don't ask).