You may recall the deluge on the 22 July which greeted three newcomers. I didn't expect to see any of them again ... but ... quite amazingly ... all three turned up for more punishment.

At coffee last week someone had the temerity to cast doubt over the veracity of Bike Bus reports. Just to show how open Bike Bus management are ... and how we don't bear grudges ... I reproduce two unsolicited, uncensored contributions below.

After last week's somewhat muddled bike-bus, I think the Bus Company tried a new approach this week. It seems to be based on the premise of running as many different routes to the coffee-pot venue as possible, in the hope that the aimlessly wandering passengers will occasionally coincide with a bus, join it, & thus arrive at the intended location. A sort of 'scatter-gun' system, rather akin to Judy's recent route from Cold Harbour to Escot - if you cover every road, eventually you come across every possible passenger & hit the right venue.

Sitting at the same table as Kirby in the Crediton Tearooms, I should have realised the proposed ongoing ride was not going to be a doddle. Almost everytime someone came up & asked "where are we going for the follow on ride" or similar, the response "Chagford" from Kirby generated looks of incredulity & dismay, & the odd groan or strangled cry. My guess is the bus driver was punishing us for the previous week's havoc.

Nevertheless, approximately 10 gullible bike-bus passengers followed sheep-like as we headed to the hills. Actually, the bit to Chagford was not too bad, but after lunch en route to Moretonhampstead we got a taste of a couple of real steepies, & then the slow pull up over the next ridge, with a compensatory downhill to tea at Dunsford. If it had not been for some passengers taking on copious supplies of fuel in the form of Devon cream teas, some may still have been aimlessly struggling through the Dartmoor landscape (no names, no pack drill, but possibly It was A New passenger spotted imbibing in the Walled Garden)!

After a further extended survey of the Teign valley, I eventually made home just before 6.00pm. Heaven knows what time the poor East Devon passengers got to their abodes, but one later reported in with a P.B. distance of 81 miles! Hey-ho, next week beckons, so we'll be well in practice for the hills around Cullompton ...

Only one was expected at Aylesbeare Cross but three turned up although there had been confusion with Tipton Cross. Ted went off in advance to Rockbeare disappearing like a rocket while Sue and Keith accompanied me following a few minutes later. The RV namely the post office has closed with no replacement but we all waited outside the nearby school until Ian, Hugh and Stephanie arrived. Thence to Thorveton bridge where we picked up Laura and Steve. We arrived at Crediton station at 1015 and were first in the queue for coffee. Not bad for a first try at bus no 2.

Weather for Ducks ... or Maybe Not!

Normally when I rains hard I wouldn't even think of getting out of bed ... but last week three new riders had signed up to the Bike Bus ... Sarah, Rob and Ian. We normally try to make a good impression on newcomers so rather reluctantly I made my way to the Blue Boar ... where I found that Judy had already led two of the newcomers astray! I wondered what to do but decided that I had better try to meet the third newcomer at the pre-arranged spot in Broadclyst. The rain then got worse and Tim contributed to the chaos by loosing Pauline, Ursula and Derek. In the one positive note of the day in Clyst Hydon we discovered that the landlady at the Five Bells had taken pity on Stephanie and given her a free mug of hot coffee!

The rest of the morning became something of a blur ... as my mobile recorded seven calls from groups of cyclists lost in East Devon ... I think it is the first time that we have lost all the passengers before coffee.

Now ... if you were a duck ... and it hadn't rained for six months ... how would you feel if you heard rain beating on the roof of your shed ... and then you heard your owners clearing off and leaving you in the dry when they went out to 'enjoy' themselves in the wet ... ?

Judy & Tim checked out the Woodbury stop but no takers. Judy's bike had to have 2 new wheels fitted - having a puncture means one checks the rims - concave so not good! So because of this, equipment out of sink - It took Kirby to notice Duck had been left behind, squawking in a shed. He would have enjoyed the rain too!

2 new riders at Topsham. Off I sped, leading the hapless pair towards Exeter leaving Tim putting on wet weather gear . Sinking feeling at Plants Galore. Wrong route- how embarrassing! Nothing for it but to own up and hot peddle to the Blue Ball where the Exeter contingent of Kirby, Pauline, Mike, Ursula & Derek were waiting.

Met the bunch, in pouring rain, but promptly lost them again as new Sarah had a puncture on the main road, opposite the back of the airport. Usual trouble of getting tyre off and finding hole, etc..

Off again, up hill to westward, new cyclists vanish off face of planet! Had they turned left? So fast gone in a puff of spray. Felt I ought to check down hill to Clyst St Lawrence, no sign so nothing for it but to retrace steps and try & head for Uffculme. Tim lost Ursula and Derrick - hope they weren't washed away! No sign of Kirby & the others - his route remains a mystery. Woodbury contingent a bit of a shambles this week - have to do better next time !

After coffee Judy led us to Escot ...

Was out this morning to catch the bike bus at the Bridge Road swing bridge, but no one there so carried on to Exeter Quay. Roger, Marilyn & Dougie were waiting, therefore a total of only 4 passengers! Nothing more to report as everyone was on their best behaviour, pleased to say! Nobody came off and no mechanical problems.

Meanwhile three of the fittest, sleekest, and stylish bike bus members decided that the 3-mile trek to the Nurseries was rather beneath their dignity ... so planned a mega-expedition to Torbay and back ...

... however at the last minute nerves crept in and they decided to take the train one way.

On the way back I realised that my choice of route was singularly inappropriate. We passed Stoneycombe Quarry and Mike decided that we needed to be thoroughly educated on the challenges faced in extracting limestone deposits in the vicinity of habitation ... we then discovered that the cafe in Denbury had closed 23 years ago ... and to compound our misery we then received a lecture on the geographic distribution of, and properties of, ball clay deposits (I bet you didn't know that there is a ball clay heritage society - http://www.clayheritage.org/pages/welcome.htm). At this point I decided to abandon the planned route and headed for the nearest cafe - which turned out to be in Chudleigh (oh no! ... cue another limestone lecture). After this Stephanie descended into a trance-like state ... which was probably just as well as she subsequently had no memory of the 4 mile climb up onto Haldon Hill (Upper Greensand over New Red Sandstone or was it Sandstone over Greensand?). At the top we escaped to the Haldon Ridge Cafe where at last the conversation turned to food. After taking on a considerable quantity of refreshment we descended back to Exeter at great speed ... with several of the party naughtily managing to trip the 20 mph warning signs in Exminster (Heavitree Breccia).

It seems that several bike bus members ... despite the warnings in last week's email ... have continued to besmirch our good name. Photographic evidence is emerging, from hitherto impeccable sources, of more inappropriate behaviour. Some of the pictures are too sordid to release (at least to those of you without Premium subscriptions) ... but the following image hints at some of the behaviour on display. 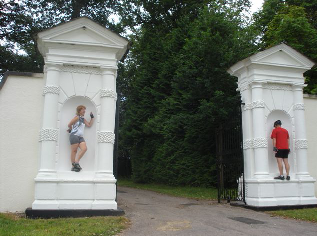 Last week a good size party visited the very select area of Woodbury where Tim & Judy live. For those of you who keep up with these things they have just returned from the South of France having pedalled every centimetre of the way - online report.

They laid on an excellent spread which we were able to enjoy in the sunshine. I for one was very pleased to find that Duck was in rude health having survived the vicissitudes of the journey - especially after learning that shooting ducks is a common pursuit in France. 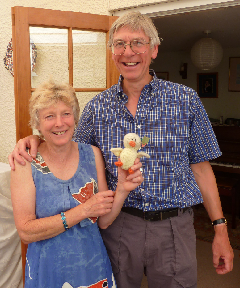 The money raised will be donated to the three charities - Shelter Box, the Burbur Health Centre and the Jonah Home for Children & Hope House Refuge Orphanage for Kids - for which they undertook their French 'coast-to-coast'.

Incidentally some more details are emerging of this ride - including some previously unseen pictures of duck letting his hair down (or should that be down down?) - see more here. 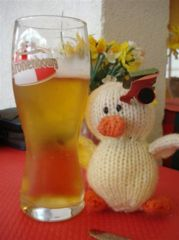 It was extremely difficult to drag people away ... but eventually a party set off over the Common towards Peak Hill and Sidmouth ...

Incidentally Sidmouth is very concerned that some of the loutish behaviour prevalent in Cornish resorts is spreading eastward. The Sidmouth Herald has released a series of articles and photos from reporter "S" detailing some of the aberrant behaviour that is now becoming all too commonplace. Examples include nose picking, megadeth skull caps, sartorial infelicities, inappropriate nakedness, pigeon toes and stealing multiple pairs of shoes. I trust that Bike Bus members will report any such behaviour to the relevant authorities. 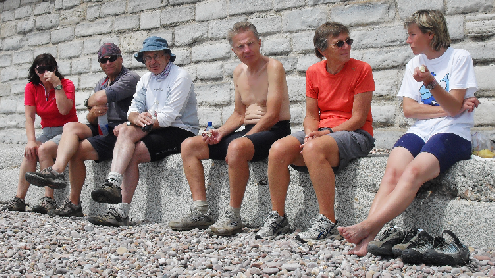 The bus went to Willand for coffee and Escot for lunch with two survivors making it to the Quay in Exeter for afternoon tea.