Keith met me at Aylesbeare (having done several miles previously to warm up!) and we picked up Ian near Broadclyst while en route to Killerton. It was on the M5 bridge that Stephanie and Mike 1 joined the team. So it was just five of us approaching from the east passing Ken & Iris Strong starting their ride at Thorveton. The bus ran smoothly but has room for more passengers.

Meanwhile the Exeter crowd made their way separately to the Newton St Cyres Golf Club. After coffee a party bravely set out for Tiverton ... the hilly way! We made our way up Cadbury Hill but the weather then closed in and we chose to descend to Bickleigh with a view to riding the ridge south to Silverton. En-route Kirby pointed out one of the worst 'roads' in Devon. Unwisely three ... Keith, Roger and Ian decided to try to ride up it ... but the mixture of two-foot deep potholes, grass and lack of surface meant that they all agreed that 'road' probably wasn't the most appropriate description.

After this Roger decided to challenge the youth of Silverton to a cycle race. Premium Subscribers can learn the result here ... 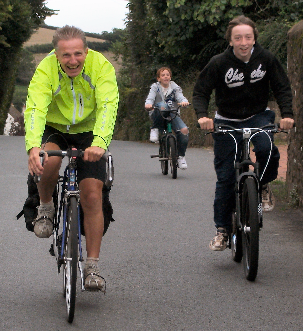 After all this excitement we had lunch at Killerton.

Talking about lunches ... last year the Bike Bus numbers were such that we couldn't be accommodated at the traditional Coffee Pot Xmas lunch at Willand - so we had a buffet lunch at the Orange Elephant instead.

This year Pete and Jean have had a chat with the WIlland Restaurant and they are willing to close the restaurant to their walk-in customers and solely host the Coffee Pot and Bike Bus members. This can only be done if we start lunch at around 13:30.

I'd be grateful if you could let me know whether you wish to join the regular Coffee Potters at Willand or whether you would prefer to attend a separate lunch.

Stephanie has risen to the challenge to design a Bike Bus jersey. Keith Portlock has agreed to develop a pre-production design based on Stephanie's drawing. 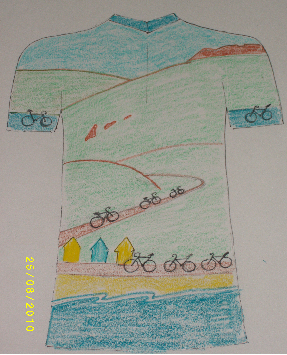 Last month we engaged management consultants to review the second year of operation of the Bike Bus. The full report is available to Premium Subscribers ... however the main criticism is that the group is like something out off 'Last of the Summer Wine' ... and that we should consider moving into the twenty-first century.

To this end the Bike Bus Management have taken out an expensive contract with Facebook ... and you will be pleased to know that the Bike Bus now has a Facebook page! The Bus timetable is published there as well as a collection of interesting photos of Bike Bus participants. If you have a Facebook account ... let me know ... and we will sign you up. Alternatively search for 'Exeter Bike Bus' on Facebook.

Four people turned up at Aylesbeare Cross, Bob & Sarah from Exmouth, Judy from Woodbury and Keith from Cadhay. No one else met us at the arranged pick up points partly it seems because they had not kept a record of the time table. However Arthur was seen three times, near Rockbeare, Killerton and then Latchmoor Green where he joined us for the final stretch to Stoke Canon. Perhaps he was travelling first class!

Meanwhile a party of five led by Mike Booth set off from the Quay and successfully circumnavigated the eastern fringes of Exeter. After an excellent tea at Pete and Jean's threatening skies discouraged anyone from doing a longer trip - so a modest group of five decided to loop round Ashclyst Forest to Killerton. The ride was interrupted by plaintive txts from Stephanie lost somewhere in East Devon. Eventually we all met up at Killerton where Roger entertained the (rather bored looking) staff with his diabalo skills. 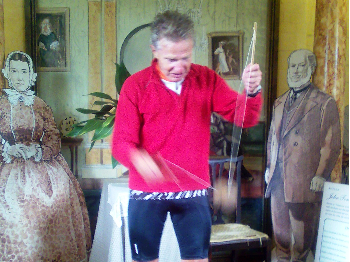 Tim and Judy are organising a weekend on the Isle of Wight over the 1st May Bank Holiday next year to coincide with the annual Randonnee 100 km cycle ride on Sunday 1st May. Details are on http://www.cycleisland.co.uk & click on route.

The plan is to leave cars at Lymington (overflow park at the port is about £30 for 3 days), cross by ferry to Yarmouth (http://www.WightLink.co.uk) & cycle across the island (about 18 miles depending on the route) to Shanklin & stay 2 nights.We would then return on the Monday (various possible routes) to Yarmouth for the return home.

Possible accommodation options are camping (http://www.ninham-holidays.co.uk) or B&B at about £30 per night & Geoff & Penny have kindly said it may be possible for them to take camping equipment in their car if they drive across the island on a shared cost basis.

John Rowland has offered to look at various off-road possibilities including a Sunday option for those who prefer not to do the Randonnee.

Further details will follow but it would help if those interested could let either me or Tim & Judy know so we have an initial indication of numbers & if so, whether camping or b&b is preferred.

Two week's ago the Bike Bus passengers innocently turned up at Escot totally unaware of the challenges ahead. Due to two unfortunate route finding errors the party rode most of the way up East Hill and soon after ascended Peak Hill from the Sidmouth side. Twelve started the Peak Hill climb but six fell by the wayside (i.e. 50% success rate - which I think is a C in GCSEs). Strangely on the Sunday Sarah also felt compelled to lead a party of seven up Chineway Hill followed by the Peak Hill climb - this time only three failed (57% success rate). The names of those who failed are available to subscribers of the Premium Edition of this Newsletter.

Last week we attempted the most complicated Bike Bus routing ever ... with five possible starting points. To compound the difficultly Devon County Council had dug up the agricultural crossing near Junction 30 and we had to include a last minute diversion. Five (Kirby, Mike B, Mike B, Jill and Tom) set out from the Exeter direction and successfully met up with thirteen from the far east. John Rowland reports:-

The Woodbury team namely Don, Tim & Judy, Rob & Sarah and new girl Toni plus Keith from near OSM joined me at Aylesbeare Cross. Ted & Sue plus Ian joined us at Whimple with Warren & Stephanie arriving bang on time at Talaton. Sarah S caught us up when we stopped for Tim's broken spoke (rear wheel, cassette side, rim brake, unusual!) near Aunk. He wisely turned back so it was just 13 of us that met 5 x BB 1 passengers precisely as arranged at 1005 at Clyst Hydon. This new alternative bus route seems popular with the Woodbury and other village riders east of Exeter.

Unfortunately Judy decided on an impromptu diversion coming into Cullompton ... and deservedly paid the price by ending up at the back of the queue for coffee.

After coffee we braved one of the steeper ascents onto the Dunkeswell plateau before enjoying the zig-zag descent into the Luppit Valley before a well deserved lunch in Honiton.

Some of you will be aware of Tim & Judy's connection with charity fund-raising in African villages in Kenya and Namibia. The good news is that after hearing of the problems faced by the Bike Bus ... especially the floods of two weeks ago ... the villagers have raised enough money for four Shelter Boxes! Last week I accompanied Tim, Judy and Stephanie down to Helston in Cornwall to pick them up. Unfortunately the boxes weren't quite ready ... and at this point I must admit that rather lost interest in the proceedings. Fortunately Tim and Judy stayed awake and have summarised the events of the day. 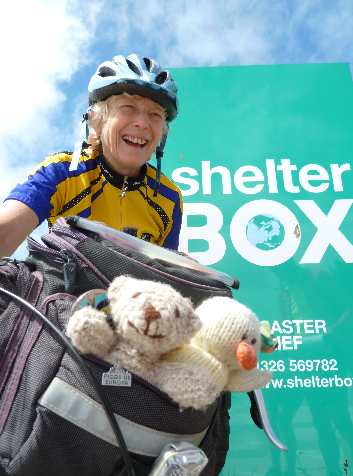 Many of you will have met Anthoney and Amanda who gave up professional salsa dancing for the chance to cycle to Paris. The full story of their ride ... which is not for the faint hearted ... is now on-line at http://amandaspedaltoparis.blogspot.com/