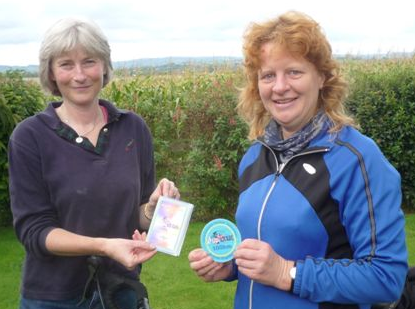 Meanwhile Bike Bus Intelligence has discovered that Ian Lindsay snuck off to Bristol at the weekend to do the Tasty Cheddar Audax. Although I understand he had some difficultly in obtaining sufficient cake - he did complete the route. This is a fantastic achievement considering that only a month ago he was under general anaesthetic having his insides re-arranged. Pippa and Stephanie need to watch out!

On Sunday 31 October John Rowland is leading an off-road ride on Exmoor. If you would like to go - or just receive more details - you can contact John on 01395 232 610 or by mail at mailto:jvrowland39@btinternet.com

Due to an administrative error the timetables for the two Bike Buses didn't mesh correctly last week. There are various theories as to why this happened but I can confirm there is no truth in the rumour that Kirby wanted to arrive first to avoid a long queue for coffee (although it was noted he did arrive first).

As a result of the problems we have actually received a complaint from a Mr Harding of Exeter:-

I was about 10 minutes too late to catch the bike bus at the Quay, but was in good time when I got to the Clyst Vale College and was rather surprised no one was there, as no one was seen along the route. Ian very soon arrived after me and he too was expecting to get on the bus. We later joined the the Woodbury to Willand bike bus at Clyst Hydon and found out the bike bus from the Quay was EARLY!!!!!! Well! What happened here!?!

This has been passed to the complaints handling section.

Also of some note (again thanks to Bike Bus Intelligence) it was discovered that it was Mike Booth's 60th birthday. We all chipped in and managed to buy him half a slice of cake. Unfortunately this raises the average age of the Bike Bus by 3 weeks. 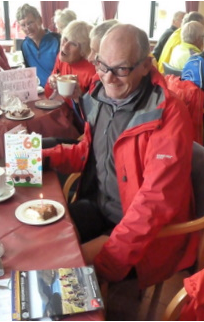 Despite the mayhem we did attract two new riders - Ken Smit from Wellington and Anthoney Strowger from Exeter. Anthoney is doing research into the mental capabilities of pensioners - so be careful what you say to him - and try not to repeat anecdotes more than twice. You can readily recognise him as he looks (and is) about 30 - and thus has reduced the average age of a standard sized Bike Bus by 1.7 years.

We have decided to hold any Bike Bus Xmas meal on a different day to Pete Luxton's Coffee Pot Xmas lunch (which is on Thursday 16 December at Willand). This will allow you to go to both celebrations (or one, or neither!). We have yet to fix a date - or indeed a location - for the Bike Bus meal - but we may elect to have it away from the normal December period. One option might be the second anniversary of the Bike Bus starting (which was 5 November 2008).

Just to let you know, Sues & I completed the Mad Hatter route on Thursday. We set off just after 0830, & once clear of the Exeter traffic, we enjoyed the Devon lanes & fine views from the highspots. Weather kind with only one short shower. Arrived back at Trews Weir at 1630. Email from Steph said only 2 of them completed from the main party. We saw Ted G at Otterton Mill - said he'd lost Sue G (again), but we understand he found her later!

A flash of inspiration prompted me to write this ... Thanks for a great day John, and for the idea Kirby!

Last week John's ride to Exminster! Well we seemed to find all sorts of back lanes and cycle paths never tried before. I don't know that we could find them again either!

At one point opposite Wrobrook Manor John suddenly slapped on the anchors, leapt off his bike and disappeared into a barn. He re-emerged, saying Just checking my supplies! Well, I wonder? Maybe it was just the cakes for the AGM!

Due to staff sickness, Top-Gun Driver 1 was unavailable to carry out his duties on Route 1, so a lowly deputy was given the honour to drive this prestigious vehicle. A larger than usual 9 passengers plus Driver set out from the Quay Terminus, but less than halfway to the Swing Bridge Request Stop Penny punctured & Geoff assisted in the repair, whilst the remaining 8 rode on. We were joined by 5 more at the Bridge. Exminster bound, we lost another as Trevor realised his cycle helmet was (hopefully) where he’d left it on the picnic Table in front of Bar Venezia (it was!) All eventually arrived at the Golf Club.

There was a good turnout of riders, & some nice pastries. Then 12 agreed to ride up onto Haldon to seek a lunch. It was a pleasant meander through the lanes to Black Forest Lodge, then right uphill (slog) onto the ridge. Group A (4 with no sarnies) lunched at the Haldon Grill on Telegraph Hill, whilst the 8 better prepared Group B dined in a draughty pyramid awning at The Forest Park.

We all reassembled there after lunch, to then split again as Judy, Marilyn & Roger continued NW along the ridge to do the Dunchideock loop, & we 9 dropped NE into the valley, turning right just before Clapham, & through Brenton to the A38 bridge. This was the Partridge Cycles Request Stop, so Jill & Tim alighted to part with some hard-earned. We 7 then rode on to Peamore, right passed Pottles Farm, Exminster & the Swing Bridge. Glenis away here, & the remainder then took afternoon refreshments in the Driver's Canteen at Trews Weir. 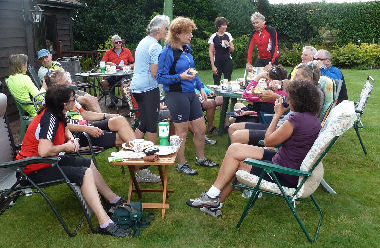 Ted, Sue, Keith, Tim and Judy joined me at Aylesbeare Cross for a roundabout country route to Secret Location #3. Unsurprisingly no one else appeared as we passed Westwood and Clyst St Lawrence and even Stephanie failed to appear at Talaton. After an excellent coffee stop revered BB1 leader led us to Uffculme via Blackborough and Culmstock. En route the seventeen of us came across an old tractor with its nose in a small ditch. As it turned out our elbow power was sufficient to make the difference and help the driver back onto the road, which must be a first for Exeter CTC. After a late and long lunch and still with all present BB2 driver led the way to Escot via Plymtree. Sadly just after that village a newly cut hedge caused four punctures all in the space of a few minutes. Most travellers pressed on but a volunteer half dozen helped with pit stop duties and somewhat later resumed their ride. Time was now pressing so they failed to make it to Escot dispersing at Talaton instead. 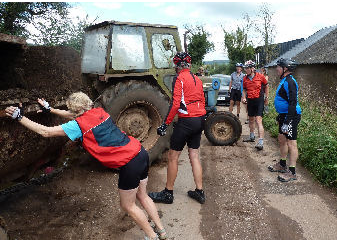 A party of Bike Busers made their way to Sidmouth to watch the Tour of Britain riders climb Peak Hill ... 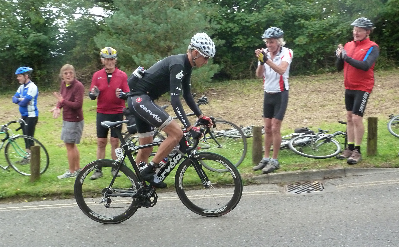 Last week 16 cyclists met up at the Swing Bridge for the ride to Powderham. Bike Bus driver #2 reports

Both Gamesons and Ian met me at Aylesbeare Inn, Ted having done 150 miles the day before looking lean and hungry. We set off along Withen Lane only hear a whooshing sound as Stephanie caught us up on her new express steed as we crossed the main Sidmouth road. No one joined us from Woodbury so we pressed on from Woodbury Salterton to Topsham when Jill arrived, surprised to see us. And so through Countess Wear housing where the bus driver missed the cycle path and had to go cross country to do a regain. This is where a large bird resenting our use of “his” footpath deposited a message of disgust on Jill’s leg. However with the quick use of a borrowed shovel and due application of Stephanie’s tissues all was well. So six of us met the remainder at Exe Bridges bringing the total to sixteen travellers coming under the control of revered driver BB1.

After coffee the sun encouraged eleven of us to climb up onto the Haldon ridge and the Teignmouth Golf Course. Here Ian accepted his role as flanker and expertly intercepted a sliced golf ball headed at high speed towards the leader (me!). After this incident we descend to have lunch on the front in Teignmouth. Laura then decided to take the train back along the coast to enjoy Brunel's handiwork ... and the remainder cycled through Dawlish, along the cliff top path and back to Exminster ... 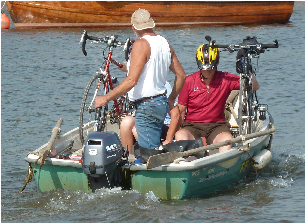 ... where we found the 'Coffee on the Corner' cafe was closed!! Undeterred but a little disappointed the adventurous amongst us (four) commandeered a boat to take us to Topsham ... where Don persuaded us to visit Route 2 Cafe.

Next week two stages of the Tour of Britain will be passing through Devon. On Tuesday 14th the Stage 4 starts in Minehead passes through Honiton, Sidmouth and Exeter en-route to the finish in Teignmouth. On the way they are scheduled to go up Peak Hill at 13:11. I'm planing to cycle to Sidmouth for lunch (~12:00) and then to watch the riders pass through. The provisional timetable is

Feel free to join me.

Thirteen have already signed up already (amazingly including two from Australia!!) ... let us know (Tim, Judy or Kirby) if you want to come. Details at http://www.lkjh.biz/index.php?title=DaExeter2011TripToIow

The numbers registered for the AGM already exceed the capacity of John and Julie's bijou apartment. If you are desperate to come please contact John first to see whether anyone has dropped out. If you have already registered your interest - but are now unable to come - again please let John know so he can reassign your mug. John Rowland: 01395 232 610

One topic that will be discussed at the AGM is the CTC Exeter finances. In recent years we have spent £50-100 annually - mostly on paper, ink, photos, envelopes and stamps which are used for producing leaflets and publicity and to provide information to potential new members. This year we were very lucky to receive an anonymous donation of £100 - without which we would be about £20 in debt.

One option to put our finances on a sounder footing would be to introduce a small charge for taking part in Bike Bus rides - this might be 20-50 pence per ride or an annual subscription of say £5. Alternatives would include fund-raising activities such as coffee mornings, barbecues, salsa evenings, etc..

It would be helpful if you could, before the AGM, consider your views on such proposals - if you are not coming but have strong views - could you let John Rowland and myself know.