This was the last Bike Bus to be held before Old Rydon Lane re-opens - so the Exeter crowd took the opportuinity to try out the new 'Blue Bridge' over the M5. 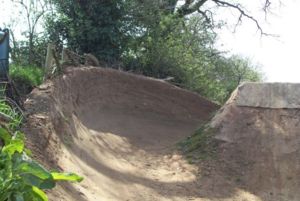 We met up with the East Devon crew at New Inn, Broadclyst and John led us the hilly route to Willand via Bradninch. After coffee, with a hilly Audax in prospect at the weekend, there was no enthusiasm for a long ride - so we accepted Warren's offer to led us to Escot. 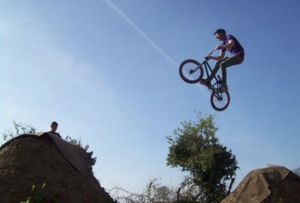 On the way we diverted to see the 'jumps' near Kerswell where earth has been sculptured into steep 'jumps' and 'berms' which are used to provide a challenging course for off road riders.

Kerswell cyclist, Gee Atherton, used experience gained at this site to race James May driving a Renault Clio down the narrow streets of Castle of São Jorge's district in Lisbon. Gee won. 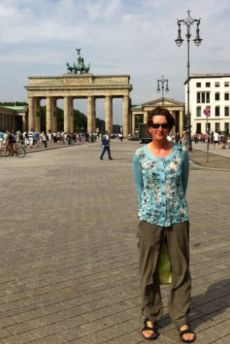 On Sunday the inaugural Great Tour Audax was held in Seaton especially for Bike Bus members.

Pathetically, despite years of training, only six Bike Bussers turned up. Several non-shows claimed they were abroad, some said they were sick, and one sent her husband along hoping that we wouldn’t notice! 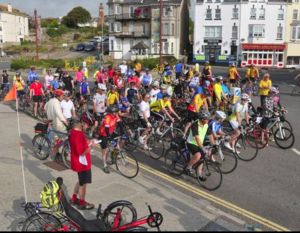 The Executive are considering what action to take against the miscreants.

Fortunately 108 other people turned up (they are now being considered for honourary Bike Bus membership) and we had a good day. Some photos of the event are available on the AVP Facebook page.

On Tuesday – given that Ian was leading an extreme expedition over Exmoor the Executive decided to round up a party of Bike Bussers and set them loose on the 50 km Audax ride. Four Bussers (almost as many as turned up on Sunday!!) enjoyed a pleasant loop in the August sunshine. 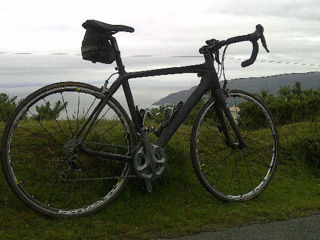 Today's ride kicked off at Ian's House at 07h30 with free bacon sarnies. Not wishing to mark myself (as that may be a little biased), I feel as though we should wait for either Steve or Richard to give a mark for the cafe scores table!! - However, it is safe to say, that Steve reported that he would be happy to let me cook the breakfasts at Livermore Farm next time he is away on holiday - perhaps a little contract negotiation needed though before this work placement comes to fruition.

So we bimbled off to Wiveliscombe, picking up Ken from the Welly Wheelers on the way. After negotiating the 5 up chevron road out of Wiveliscombe we tracked along to Wheddon Cross and then climbed up and over Dunkery Beacon - Steve zoomed up on his first trip out on his brand new full carbon Ribble Racing bike (made by me). The fastest speed of the day (47.1 mph) was recorded on the descent and then a coffee stop in Porlock. 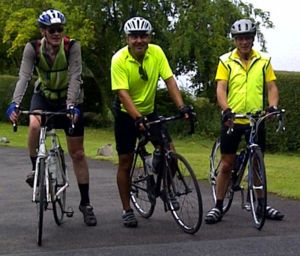 The Homecook Cafe in Porlock was good, but, unfortunately, the in excess of 50 miles to get there and the in excess of 1000m of climbing, means that it scores 0 in 2 of the 5 categories - total score 13pts.

After coffee, we rode up the Toll Road up Porlock Hill - cost us a pound each, but the road surface was great, there was no traffic and we avoided the 1 in 4!!

Lunch in Lynmouth was at The Coffee Mill - again it scores 0 in 2 of the 5 categories due to distance from Exeter and amount of climbing - total score 13pts.

We climbed up and over Brendon Common before descending into Dulverton via Winsford Hill. A quick beer in Dulverton and then the usual track back down the Uplowman valley to Cullompton.

96 miles in total - zillions of metres of climbing, so next week an easy ride to Exeter Quay!!! 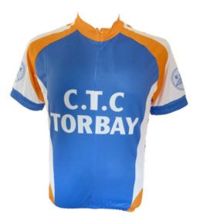 As the official Coffe Pot was at Bearnaville Nurseries (which has asked us to limit numbers) the Bike Bus bunked off to the Ridge Cafe in the Mountain Bike Centre on Haldon Hill.

On the way up we bumped into Tom Pales (who for once was on two wheels rather than three) and at the top we met up with three CTC Torbay riders who were sporting their new custom Primeval jerseys.

After a leisurely coffee Ian led us down into the Teign Valley, through Dunsford and up to the Woodleigh Coach House. After this the party took the old A30 home (not literally).

So it was just Ian, Debbie and Richard who left the Swing Bridges at 09h00 - Richard had come to Ian's house, so racked up nearly 30 miles before the start of the ride!!

We were a little concerned as Kirby was in charge of arranging the lunch stop Cafe and he was nowhere to be seen. However, on arriving at Bovey Tracey Golf Club, it became apparent that British Rail had been working their magic once more, as Kirby turned up for morning coffee. The quality of the Golf Club refreshments are only OK, but their prices are very cheap (just £1 for a mug of tea) so they score a respectable 19pts. 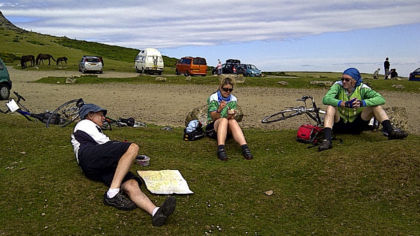 After coffee, we went on a little climb up to Bowerman's Nose and then across to Haytor where we had lunch and ice creams, surrounded by ponies and their foals. Lovely views, including as far as the fire that was burning at Nutwell Court at Lympstone! Kirby then lead us to Dandelion Cafe at Moorlands House on top of Haytor. What a superb cafe, excellent quality and value - the toilets were like a 5* hotel according to Debbie - Kirby chewed on the what he thought were breadsticks in the Gents (they turned out to be Bamboo Sticks) - so well worth the climb up to it, but unfortunately doesn't score too highly as there is over 500 metres of climbing to get there from Exeter! - 18pts

Kirby left us after the descent in to Bovey Tracey - he didn't want to appear rude to British Rail by not using the return part of his ticket!! - the rest of us returned to Exeter via Ashcombe and Black Forest Lodge - a nice change to traversing Haldon Hill again!

Next week is the Exmoor Extravaganza Part 1 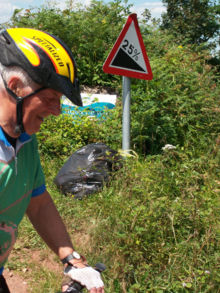 On what turned out to be a beautiful sunny day two Bike Buses headed out to a remote corner of the Killerton Estate ...

... one half the Bike Bus arrived on-time ... and the other half (the Woodbury half) lost itself in East Devon somewhere and arrived 30 minutes late.

After enjoying ourselves in the sun there were two competing rides on offer post-coffee:-

After weighing up the difficulty of these two options everyone (mistakenly as it turned out) opted for the hilly ride. This included the notorious Little Silver Hill which is signed as being 25% (1 in 4) (we await Sarah's more precise inclinometer measurement) as well as quite a number of almost as steep hills.

We eventually reached Seven Crosses for the two mile freewheel down into Tiverton. Kirby descended first ... but unfortunately a farm dog ran into the road to chase him ... straight in front of Keith ... who cannoned off the dog and miraculously managed to stay upright. 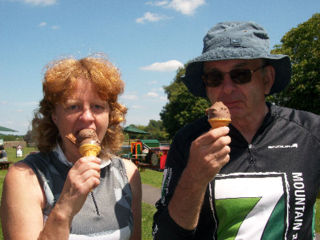 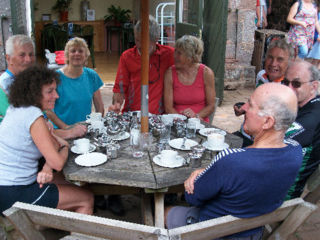 After all this excitement the Bike Bus stopped alongside the Tiverton Canal ... where the lunch stop allowed the party to rehydrate and take on board carefully balanced, healthy refreshments.

Afterwards the party made its way back through Brithem Bottom and Bunneford Cross to a well deserved afternoon tea back at Killerton.

Ian, Richard, Diane and Gareth set off from the New Inn at Broadclyst at 09h00, without Mrs Ironside-Smith - some excuse about front derailleur malfunction!!!

Lunch was taken in Dulverton, in the sunshine. Lots of good establishments in Dulverton - today's choice was the Bridge Inn, so that we could sit outside - great value for money - 18 pts. Diane and Gareth left us at Dulverton, whilst Ian and Richard returned southwards down the Uplowman Valley.

Next week, a double-header stop at Bovey Tracey with a little nip up onto Dartmoor!! (tried to get us in to Ugbrooke House for afternoon Tea, but they want to charge us £6 entry fee each, so I politely said thanks but no thanks).

PS - Looking ahead to the first Tuesday in August (2nd), am planning a 90 mile hilly trip round Exmoor - the timetable will be 07h30 at Ian's house in Cullompton for bacon sandwiches and Tea/Coffee, followed by a 08h00 departure - RSVP to Ian for those wishing to attend. 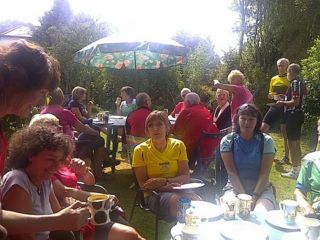 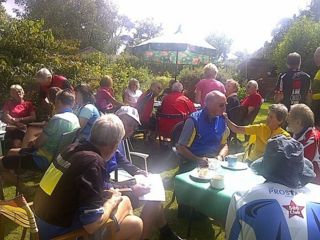 Judy & Tim Green hosted the Coffee Potters to tea on Thursday July 7th & wish to thank everyone for their kind donations. We raised £136.70 in total for Force Cancer Charity which included £20 from Malcolm King from the bring & buy sale of bike equipment which he ran so a special thanks to him for this.

More than 40 people attended & in spite of a dubious weather forecast we were able to sit out in the garden & even enjoy some sunshine ! Thanks again to all. 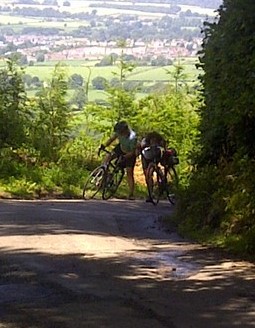 Various conflicting accounts of what happened next have been received. We only have space to reproduce a small portion of the numerous acrimonious emails that were exchanged. We have also resurected a rather grainy photo that was taken on the post coffee outing - which would appear to show two unidentified Bike Bussers walking up a hill:-

Caught in the act of walking up the hill and then trying to pass off that you rode up, is a very serious offence.

You leave me with no option but to go through the proper chain of command to report this incident.

The Bike Bus Executive have been informed!! it is now in their hands to judge and issue punishment.

ps Good luck trying to come up with some mitigating circumstances, but to be honest, i don't fancy your chances! - i'm sure you'll look fetching in black!!!

The Bike Bus Executive are in an uncharacteristically charitable mood following their break in the South of France and have decided not to award the Black Sheep Jersey this week.

3 Bike Mini-Busers (Ian, Richard, Diane) bimbled northwards through Kentisbeare and Cullompton, before arriving in Wiveliscombe for morning coffee. Martin and Yvonne from the Wellington Wheelers were already in residence at The Court House, so we joined them for coffees, hot chocolates and Lemon Cake!! - excellent drinks and cakes - 19 pts

On mentioning that we were going off to explore a new hilly route that Ian had found on the OS map, Martin and Yvonne made their excuses and went off in search of a flatter route to Watchet.

Having completed the hilly section, we stopped for liquid refreshment at Ralegh's Cross Inn - 12 pts (struggles to get points as it is so far and hilly from Exeter) - before enjoying a 12 mile downhill (ish) section in to Bampton for lunch. We picked up a new member - Gareth (friend of Diane) - at the Bawdens Bakery - 20 pts - food and drinks were excellent as always.

A sneaky coffee stop at Ian's house greeted the Exeter-bound bike mini-busers before continuing their final stage via Bradninch, Killerton and Poltimore!!