Please note that most of the Bus Bus staff are away on their annual holiday and no more reports are likely to be posted until mid-June.

However if you are interested in their little outing Sue will be posting the occasional report on her blog.

This week was the second training day for the eight cyclists who will be heading off to the Pyrenees on 24 May.

Unfortuately Roger & Marilyn's daughter decided to have a baby - so they had to rush off to Cardiff; Make & Sue recieved an alert from their Bird Alert Pro app informing them that a rare hobby (a bird apparently) had been spotted on the Somerset levels; Tom had to go to work to rescue a bat and Jenny had to hold her finger in a dyke to stop a flood. 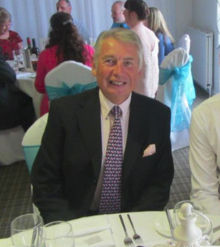 This left just Keith and Kirby ...

... but then Keith managed to wangle an invitaition to his third cousin's daughter's friend's wedding.

Thus the Executive were obliged to issue seven Black Sheep Awards even before the Bus set off.

The remaining party galantly made their way up Haldon to the Ridge Cafe. About half an hour later Wolf appeared - having mistakenly gone the the Grill Cafe. The Executive pondered over whether he merited a Black Sheep Award - or whether finding a cafe somehow absolved him.

The issue remained unresolved until we got to Dawlish were Wolf managed to loose himself again .... so that definitely means a Black Sheep Award.

We subsequently learnt that Stephanie had also gone to completely the wrong cafe ... so that makes nine Black Sheep Awards in one day.

As you may know the Bike Bus Executive are taking 8½ of their most faithful followers on an all expences paid luxury trip to the Pyrenees. They are due to depart on 24 May - so with three weeks to go the participants minds have now turned to training.

Thus after an easy ride to Escot the Bus was instructed to ride over East Hill to Sidmouth (where they were allowed a short breather for lunch) and then up the steep side of Peak Hill towards Otterton.

You may recall that the Bike Bus strayed this way once before in August 2010. On that occassion only 50% of those taking part made it to the top of the hill. This time 100% made it!

After the ride the group sat down to review how the ascent of Peak Hill compares with the climb up the Tourmalet.

They were a little suprised to find that the Tourmalet, at 2,115 metres, is a little bit higher than Peak Hill (167 metres). Not only that - the climb up from Sidmouth lasts for 2 km and that from Argeles-Gazost to the Col du Tourmalet is 36 km long.

This weeks report seems to have got a bit jumbled ... 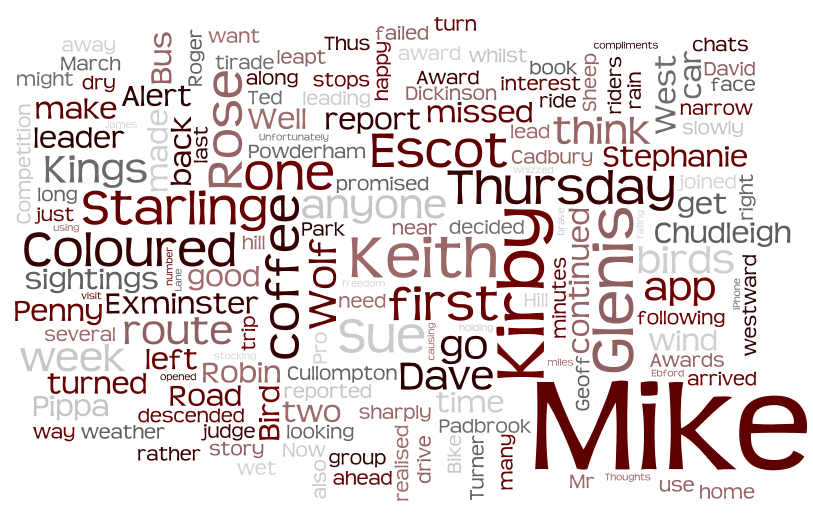 Sandy and Tony will be setting off on a great adventure this weekend. Sandy reports:-

I hope this finds you all well now that the sun is out for a day or so. Many of you will already know that a group of us are cycling from Land’s End to John O’Groats – we start in just over a weeks time on Saturday 27th April and all being well, we should be in John O’Groats by Friday 17th May.

There are six of us planning to cycle all the way – in no particular order there is Tim – fit outdoors man who likes to burn rubber: Steve – the Chief Instructor with Spirit of Adventure and he likes his lycra: Terri – excited about the trip and can cycle with the best of them: Kathy – great cyclist and makes exceedingly good cakes: Tony – the wrong side of 75 but will probably put us all to shame: then there’s me – slow, overweight and with a dickey ticker bring up the rear. We will have vehicle support ably driven by Roger (Terri’s Dad). Richy – my boy who say’s don’t worry Dad the first 10 days are the worst is joining us for the first 7 days or so. Gilly and Chris are cycling with us out of Land’s End up to Truro. We are hoping for a fair wind and good weather as we plan to camp if we can or use camping barns and hostels.

As a group we are not cycling for charity but three of the team are and if you feel so inclined it would be great if you could support one of their chosen charities.

This may not be the fastest LEJOG on record and it will not get the same publicity as Chris Evans & co who have just done it in a pink Rolls, but we are cycling over 50 miles every day for 1020 miles – at the very least please wish us good luck.

The party plan to be travelling through North Devon on Tuesday 30th. If possible we hope to be able to join them for part of the day. If you are interested in joining up contact Kirby on Thursday and we can agree a schedule.

Just as we were leaving the Quay a breathless Glenis turned up, having overslept by 30 minutes. We gave her a few seconds to compose herself and then set off westward.

We then climbed up to Upton (please drive slowly) Pyne. As we descended through the village we were joined by a Mr Norman Turner who didn't want to drive slowly. We realised this because he tooted at us and stopped to tell us so. He leapt out of his car and I wondered whether he was very brave or very stupid. It soon became clear. During his tirade we learnt

Roger bore the brunt of this tirade and subsequently reported the incident to the Police. They promised to go and have a chat with Mr Turner.

After that we had a pleasant ride to Crediton where Mike received a message from his Bird Alert app. 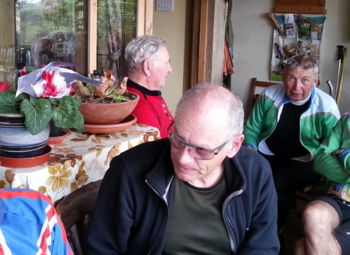 Luckily Penny & Geoff had said that if we were near to their house we should pop in for a coffee - what a fortunate coincidence!

So Mike lead us westward - but after getting his bearings - we turned eastward and arrived at Cadbury where Penny & Geoff very kindy provided us with teas and coffees on their sunny veranda.

The Rose Coloured Starling had also made himself at home - making a nest in one of Penny's pot plants - I understand they are very fond of poinsettias. Penny has promised to look after him until we need his services again.