Last September a group of seven cyclists tried out a cycle tour from St Ives to Exeter via Bude and Bideford. We hired a minibus to transport ourselves and our bikes down to St Ives and then rode back over four days. We stayed in small hotels or B&Bs. The ride was in part to assess whether such a trip might be offered more widely to CTC Exeter Members.

The proposal for June 2015 is to follow a similar route as before but to return to Exeter directly from Bude (i.e. miss out Bideford).

We plan to stay in B&Bs or small hotels.

We will use a mini-bus and trailer to take us to St Ives early on the Wednesday morning. This will allow us time to drop off our bags and explore St Ives - or take a ride west along the north coast to Zennor and Sennen.

On the final day participants can either ride all the way back from Bude to Exeter (~100 km) or ride to Okehampton (~60 km) and catch the train back to Exeter.

Note that participants will have to be able to

To simplify arranging accommodation it is suggested that the party be divided up into groups of four (or five) - and each person in the group be responsible for booking one of their four nights.

Each group would share out their total accommodation cost so that every person pays the same (regardless of whether they have a single or double room and regardless of how much they paid for the night that they booked). Thus it will be a good idea if people form a group with others who would like to stay in a similar standard of accommodation (e.g. bunk house vs. luxury hotel). 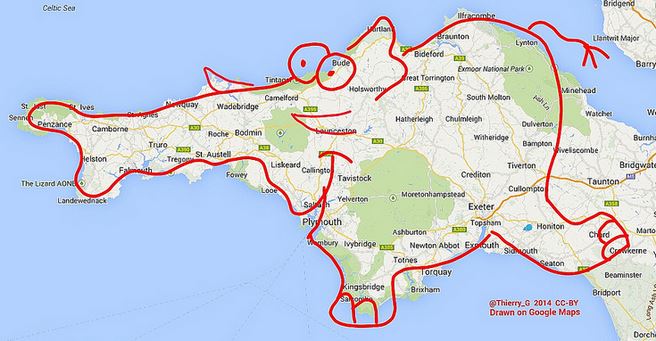 The September route is available on-line.

The four days riding back to Exeter totalled 180 miles i.e. an average of 45 miles per day.

The cost per person (including transport down and accommodation costs, but excluding lunches and evening meals) was about £170. 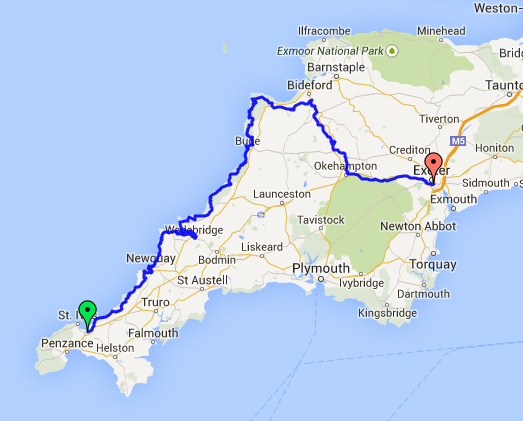