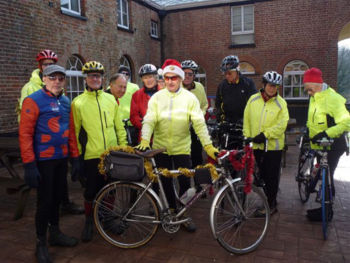 Mike and Liz Bowden organised CTC Exeter's 2008 Xmas lunch which was held at the Red Lion in Broadclyst. The event attracted 42 members - some of whom we've not seen since last year!

For the more energetic Exeter members Mike first led a morning ride from Broadclyst out to Escot for coffee, before returning (just) in time for the lunch. Mike really entered into the spirit - by dressing up both his bike and himself!

The food proved to be of a high standard - as did the company.

Many thanks to Mike and Liz for organising such an excellent event.