Exeter CTC bases its activities around group riding – it is a superbly enjoyable activity. To enjoy these activities to the full, we want them to be as safe as possible, so we have a set of hand signals and voice calls (‘Shouts’) to communicate hazards to the group. Note that these are not all the shouts and signals you might hear or see, but they are the main ones which you should know and use.

“SLOWING” Warning that we’re slowing down - From the front to avoid concertinas - From the back to tell the leader we’re going too fast.

“STOPPING” Self explanatory – to stop a ‘pile up’. Usually from the leader.

“CAR UP” or just “CAR” Car from behind, or up the line of cyclists. Used on all sorts of roads but usually where the vehicle could cause a hazard.

“CAR DOWN” or just “CAR” Car coming from the front, or down the line of cyclists. Usually used only on narrow roads where the vehicle could cause a hazard.

“SINGLE OUT” Get into single file. Usually used to enable traffic to pass. In CTC Exeter, “singling” is done by the inside rider moving forward, and the outside rider dropping in behind. The outside rider may shout 'MOVING IN' to warn others riders nearby to make space.

“CLEAR” At junctions individual riders will use this shout to indicate to the closest following rider that there are no hazards requiring him / her to stop at the junction. This aids the group’s progress.

“ON THE LEFT” Hazard (hole, broken glass, etc.) in the road on the left side.

“MOVING OUT” Move out as there’s an obstruction on the left hand side of the road.

“LOOSE” Gravel, or similar, across the road. 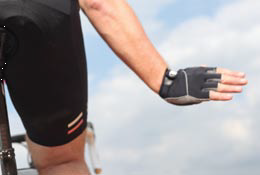 In addition to the conventional signals in the Highway Code, there are also some gestures that we use. 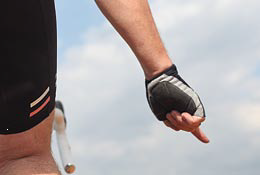 POTHOLE or HAZARD Pointing at thigh level in the direction of an obstacle, sometimes with a wagging hand.