This page outlines the work undertaken in Belgium to measure surface roughness. 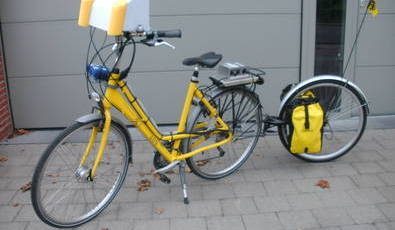 We conducted numerous experiments and different readings come to the surface if the cyclist rides with one hand, no hands or two hands. That's the reason for using the third wheel.

We use an ADXL325 SPI-accelerometer sampled at 100Hz, 50hz filter through with interrupt based timer.

We use a separate accelerometer on a standarized 3th wheel behind the bike. It is packed with bags of wet sand, vacuum packed to minimize resonant effects and to give a standard weight. Tire pressure of the third wheel is also standarized.

Rev's/sec is monitored and audio-feedback is given to accomplish a constant speed. Stdev is calculated every 3 seconds and written to sdcard's. 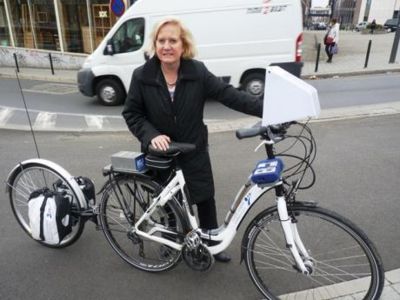 The system delivers us 100 measurement results per second and these are the basis to calculate the standarddeviation result. This result is the basis then for the scaling system. Standard deviation 45 equals tot 10/10 and 195 equals to 0/10. All values in between are calculated on a linear basis. We also give negative results if scores are higher than 195 STDEV. Same basis of 15 STDEV points per mark is applied. (e.g. 210 is -1/10.)

This scaling system was developed after months of testing and is accepted as reasonable (not too strong in its judgement but strong enough). As from 7-7,5/10 we get reasonably flat tracks. Really good tracks score 9 or more on 10. I just did some consultance for 2 projects in our commune and those new cycle paths reached a score of 9,1 and 9,6/10. Material was Asphalt/bitumen. Non-monolithical material gives mostly really bas scores.

We are designing now our 3rd generation bike which will work with digital accelerators. There is indeed no standard for measuring this (lack of) flatness except for an expensive laser system which measures the profile of the track and then does a mathematical calculation on it. The Flemish region has been the first one to introduce such standard for flatness related to cycling paths (pushed by us as a user group) but it needs a sharper standard for 0,5 m, that' s our opinion as a user group at least.

One thing is for sure: the results of the laser system which measures the profile of flatness and our measuring bike which measures its impact, have a very strong correlation which confirms the quality of our work.