A Smartphone was attached firmly to the rack of a touring bike which was ridden at about 10 mph over the section of interest. In each case the horizontal axis is time (in milliseconds) and the vertical axis is acceleration in m/s^2.

The following graph shows the accelerometer output when the phone is stationary. 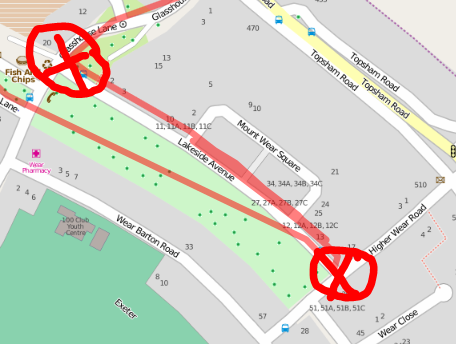 Lakeside Avenue is in the Countess Wear estate and forms part of NCN 2. The road appears to be of a concrete slab construction. However the slabs appear to have suffered heave and have subsequently been tarmaced over. The joins between the slabs are breaking up and are very uncomfortable for cyclists.

The graph covers approximately a 60 second period starting from the Higher Wear Road Junction, travelling north and stopping on Glasshouse Lane near to the shops. For the final 3 seconds the bike was stationary. 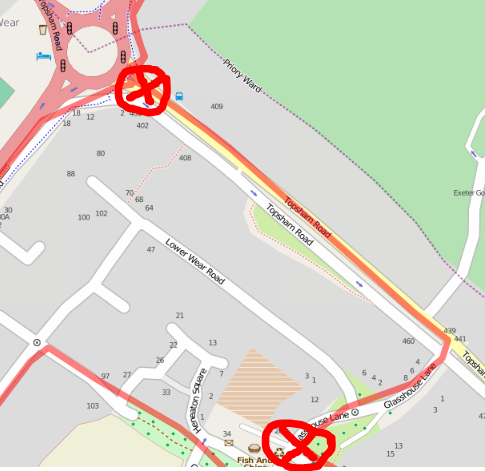 The service road alongside Topsham Road between the Countess Wear roundabout and Glasshouse Lane has one of the best surfaces for cycling.

The track below starts from the roundabout, travels south alongside Topsham Road, turns right into Glasshouse Lane and finishes at the entrance to Lakeside Avenue.

The turn is made at second 80 (shown as 80,000 on the graph). The contrast in the traces before (Service Road) and after the turn (Glasshouse Lane) is marked. 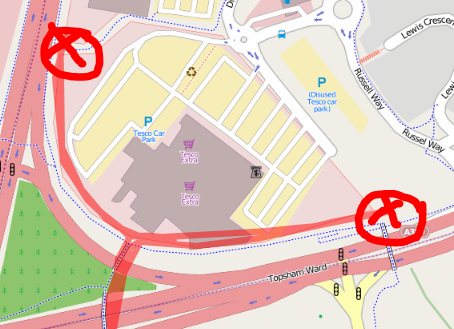 A new cycle path links Rydon Lane to the new cycle/pedestrian bridge at the rear of the Tesco Superstore and the Newcourt Road junction with the A379.

At the Rydon Road end the path is relatively smooth, but the final section approaching the bridge has significant corrugations.

The route shown started at the Rydon Lane end and descended to the new bridge. Second 50 (shown as 50,000 in the graph) corresponds to the point where you pass the turn to the old footbridge over the A379.

The photos below show a short section of the path. The crests of some of the more prominent undulations have been highlighted with chalk. In one 5 m section of path there are 8 crests corresponding to an average spacing of 67 cms.

The accelerometer data is captured at about 100 samples per second - so the system should be sensitive to frequencies up to 50 Hz.

The frequency spectrum shows that most power is located between 8 Hz and 24 Hz. At the time the bike was travelling at 7 m/s (15.6 mph). Thus these figures imply that the most significant corrugations in the surface have wavelengths in the range 29 to 88 cms.

The power spectrum shows a maximum at 11 Hz which at 7 m/s is equivalent to a wavelength of 64 cm. These values seem to correspond reasonably well with the spacing of the corrugations in the path.

The vertical acceleration values can be integrated twice to estimate the vertical departure of the surface from 'flatness'. (WARNING: This bit needs checking!).

The following graph shows the vertical departure in mm plotted against the horizontal distance in metres. The red curve is the vertical acceleration (scaled in in arbitrary units). The blue curve shows the path profile.

In this example in each 3 metre section the path regularly departs by 4 mm from level (compare with the Belgian standard of 5 mm in 3 m).