Weather appears to be warming up, even seen one or two out in shorts, quite a change from a few weeks ago when temperatures were struggling to get above zero, although this morning it was a bit parky until the sun made an appearance at about 11.00.

It's pleasing to see over 20 at Kingskerswell Arch on a Sunday morning and we have had up to 19 at the Fire Station on a Tuesday, keep it up I say.

One member we may not see out on his bike for a few weeks is Mike Radant. Mike had to go in hospital last summer and under went some serious operations, but just as he was getting back on his bike again, he fell off on the ice the other week, broke his hip and ended up back in Torbay Hospital. He's back home now and I’m sure we wish him well and hope it will not be too long before he’s out with us again. 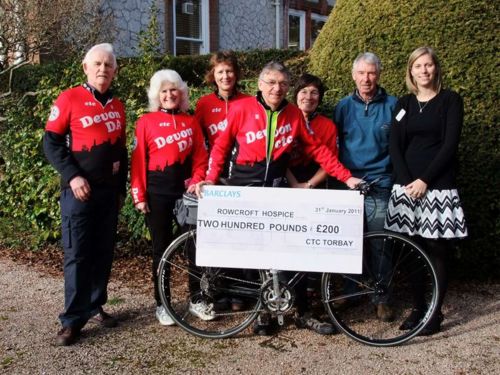 Some of you may of read in the local press that six of us were at Rowcroft Hospice last Monday.

Savannah, Ursula, Jackie, Mike, Graham and myself were there to present a cheque for £200.00 from CTC Torbay. See separate email.

Sunday and Wednesday Evening runs list were sent out at the end of last year and run to mid April. We have a meeting at the beginning of March when a new Sunday and Wednesday list will be prepared and sent to members during the month. If anyone wants to lead a ride on a Sunday or Wednesday evening during the summer can they contact Chris Bennett as soon as possible.

I think Mike has his name on this award more times than any other member and it appears he’s about to add it on again. After just four months he’s opened up a four point gap from previous holder, Rob Swayne and Phil Ellis with Dave Prudden in 4th place one point behind them.

Positions as at the end of January

We don’t give a ladies award, WHY NOT ? If we did, the points for the Lady members are ;-

Roger’s planning to keep this award on his Mantlepiece and has opened up a 2 point lead as at 30th January. With only 2 months left in the Winter Frostbite championship Rod and Tony are going to have to turn up every Wednesday if they want a chance of taking the trophy from him.

It’s been a cold couple of months so numbers have been down, with some warmer weather forecast lets see if a few more will be at the Arch at 7.00pm on a Wednesday.

As mentioned, we have been getting some good turnouts at the Fire Station on a Tuesday morning. Morning rides to a café and an all day ride on the first Tuesday of the month and now branching out even more. Off to France in May with about a dozen members, Treble points on offer for the trip.

Points as at the end of January

How does all these point tables work ?

On Sunday rides you will have noticed a bit of paper or serviette go round at the coffee stop which you write your name on, no ‘X’ please. You get 1 point for cycling to the coffee stop and a further point if you carry on to the ride destination.

On Wednesday rides there are 2 points awarded for cycling to the pub.

2 points are given for a Tuesday morning ride and 3 points if it's an all day ride.

Ursula reported at the Christmas Lunch that they are going further a field now and not getting lost quite so often. There's usually 3 or 4 out and would like to see a few more. So come on lady members, the housework can wait, get on you bike and join Ursula at 09.30 by the Bottle Bank at Sainsburys, Newton Abbot.

We have decided on a design and got some quotes for long and also short sleeve tops.

Details with picture of the design will be sent to you all, together with an order form. Cheque with order please. We do have to order a minimum of 10 of a kind.

If you haven't bought a ticket yet you better be quick, over 35 sold and closing date is this Sunday (13th) so bring along £6.00 and see John Beesley.

The Skittles is at the Jolly Sailor pub in East Ogwell, starting at 7.30 pm.

We’ve got 27 going, sailing over on the Friday night and cycling down to Brest to stay overnight and back to Plymouth the Sunday Evening. If anyone wants to go, book yourself on the ferry and let me know and I’ll try and get you into the hotel with us all.

Kevin is leading a ride to Litton Cheney, near Bridport. Up on the Saturday, back on the Sunday. Details should be out in the next few weeks.

Roger organising this again, details out in April/May

This kicks of in early March as follows;-

Graham says that he will need a lot of help at the start and also the finish. So if you’re not entering why not turn up and lend a hand, you’ll get more than a bar of chocolate for helping out.

Teams for the Championship

Why not join a team and if you stack up enough points there’s an award for you all plus a trophy to hold for the year.

Need 3 members to form a team, give it a name, I’ve always entered in the team called BONKAS, never won anything though.

Send the details to Bill Barnes (bill@bbarnes.fnet.co.uk) before the first event you will be competing in.

Future Audaxes in March and April

Details of these events and others together with entry forms can be found on the Audax website. Go to ‘www. Audax.uk.net’ and click on ‘CALENDER’

Well, I think that’s enough to go on with. Lets see a few more of you out on a Wednesday evening please, it’s not a long ride to Churston Court and on Sunday we’re all going to Morrisons in Totnes with Clive leading the ride to Shipley Bridge.

Also we will be meeting at 09.00 and the Torquay Fire Station on Tuesday morning for a morning ride.

Next all day ride is on Tuesday 1st March.