John Rowland: The weather forecast was promising and indeed proved to be the case. On Friday ten of us gathered in the early evening at Hollands Wood near Brockenhurst and decided to dine at a local hostelry which turned out to be the Rose & Crown some several hundred yards down the road. It was during this cakes and ale session that the plans for the first day were consolidated. The On-Roaders are reporting separately, but for the three remaining Off-Roaders, Penny having decided to join the opposition for the first day, our route had already been outlined.

John Rowland: So it was that John, Geoff and Pauline who set off at 10am to enjoy the sheer extent of the ancient woodland interspersed with evergreen trees and open paddocks. Much of the forest is given to gravel cart tracks that provide routes through much of the forest for cyclists. This gives everyone a good feel for the beauty, solitude and sense of timelessness provided by the great stands of trees, many of which are hundreds of years old. We clocked a good 30 miles on the day one, much of it on these tracks but occasionally in real off-road mud and through puddles as we ploughed through the forest and made our own short cuts. Coffee was at Lyndhurst and lunch eventually in early afternoon in Burley before striking back on an unpromising route, making new ground, to Rheinfield and home. Who was it in Ordnance Survey that decided to split the New Forest area into two, with sheets 195 and 196!! 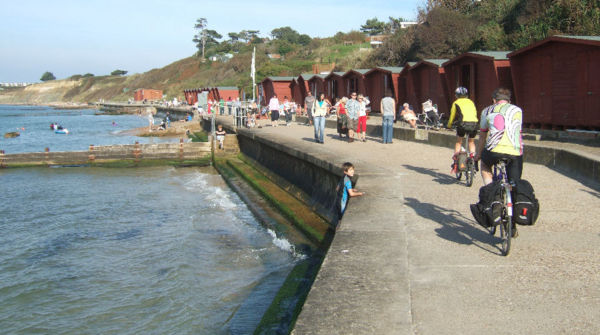 The Esplanade at Totland 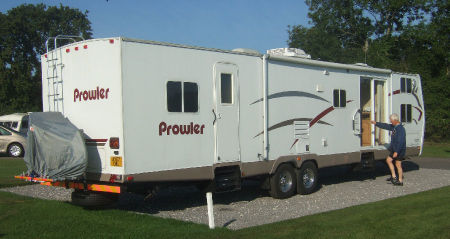 John Rowland: Day two proved to be equally promising with early mist and sun breaking through. This time Penny joined the three of us as we went south of Brockenhurst then cut across to a ex railway cycle track and, as time was running out, finished the final few miles by road to Burley for coffee. By good fortune we glimpsed the on-roaders in a café there and joined them for a happy half hour before they left for pastures afar while we explored Burley Street and tracks north towards Minstead. Here fortune temporarily left us as we could not find a satisfactory way through seriously difficult ground. So we back tracked and took up a more exciting straight run up and along the open forest for a three mile stretch before finding an ancient track to take us back to Bolder Wood. From here time was against us once again, so we followed the road into Lyndhurst for a snack lunch in the centre car park. Sadly the time for dispersal was approaching so we headed south splitting forces in the middle of Denny’s Wood so that that the Cockrams’ could head for Hollands Park while John and Pauline went on to Round Hill. Because of our earlier detour we had managed even more miles than on Saturday.

Roger Spurr: A cheery early morning hit a snag when a pony appeared from the forest, evaded Marilyn's defence, and stole our packed lunch from the tent. It stood just outside pine-cone throwing range for the next twenty minutes, noisily chewing it over. The horse lovers among you will want to know that it then spat out the complete plastic bag, clean of every crumb of food.

Dropping down to Burley

Marilyn, Roy, Don, Tony, Kirby and Roger took the first opportunity to get off the A337 to skirt the north side of Brockenhurst, with exceptional views of open country on this wonderfully cool sunny morning We passed the monumental Rhinefield hotel and went north on the beautifully treed ornamental drive. No expense has been spared to convince the well-travelled that they have dropped down a worm-hole in the space-time continuum and arrived on the north German plain. A quick left and right over the too-busy A35 put us on an equally scenic road to Burley with more trees and dew soaked meadows.

A small crowd had gathered on the verges as we approached the town, apparently to acclaim our achievement in coming so far. It was slightly disappointing to find they were there to cheer the runners in the New Forest marathon, who began to come by in droves. Most did not look as though they were enjoying it greatly, reinforcing my personal belief that if God had meant us to run he wouldn’t have allowed James Starley a secular education. We had settled into a good café in Burley when the off-roaders arrived, but they failed to lower the tone significantly.

On to Burley Street we braved the sort of traffic that the first-fine-weekend-in-ages always generates, but the road to Crow, and north again towards Mockbeggar were quiet. Even the suburbs of Ringwood looked good on such a day. We lunched on the corner of Rockford Common and put the world to rights, before heading past Linwood onto a lovely high level run to the Canadian Army Memorial. A fork put us on the Bolderwood Arbouretum Ornamental Drive which trends relentlessly downward to meet our outward track at the A35.

We were persuaded to a cup of tea at Don’s fine camper and later went our way in the gloaming, glad of a good day out. Huge thanks to John for the umbrella organisation, and for laying on such weather that umbrellas were not even thought of.

John Rowland: That evening just Don and I were left to our pub meal and a quiet evening. Kirby, my enthusiastic tank warfare student, had also shared the caravenette, but I am pleased to say that he did not ask me any more military questions during the weekend. Monday dawned well so while Don packed up the mobile hotel I was able to spend a sunny morning exploring new routes in the Rheinfield and Wilverley areas, seeking further interesting challenges on the more open ground in the south of the forest. However eventually even my time ran out so, after a late snack lunch, I too had to head west for Devon. My thanks to all who supported the weekend and, given similar weather, shall we repeat the expedition next year?