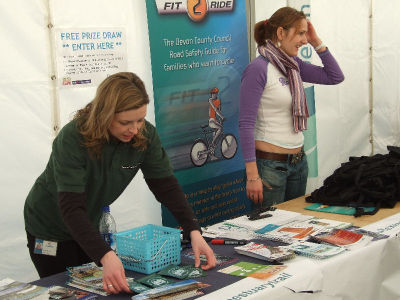 Stamping cards to qualify for a free goodie bag

On Saturday 1 March Devon County Council organised a 'Be Naturally Active Fun Day' to celebrate the official opening of the Exmouth to Lympstone section of the Exe Estuary Trail.

In Exmouth, on the King George V Playing Fields, a marque was erected housing stalls where you could sign up to a range of energetic activities. Youngsters could get personalised badges and a card - which if stamped at both ends of the trial - entitled them to a free goodie bag.

The Lympstone Primary School are working with a local artist, Andrew Stacey, and the Exe Estuary Officer, Jenny Lockett, to design artwork which will be used to decorate the concrete panels at the Lympstone end of the path. 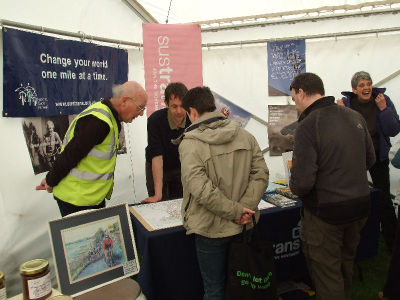 Andrei Burton gave a demonstration of his amazing bike handling skills - fortunately this level of skill is not required to use the Estuary Trail.

Other entertainment was on offer including 'crazy bikes' and music. Interestingly all the refreshments were provided from pedal driven contraptions. One enterprising family have branded their bike-based operation as 'Exe Trail Ices'.

The Exmouth Bike shop, Knobblies, was offering free bike check-ups and the new Exmouth Cycle Hire shop, which is based in Victoria Road, were showing the range of types of bike for hire.

The Council are considering whether to allow a cycle hire facility to operate from the large car park behind the Rail Station - which would be a better location for youngsters to start from. 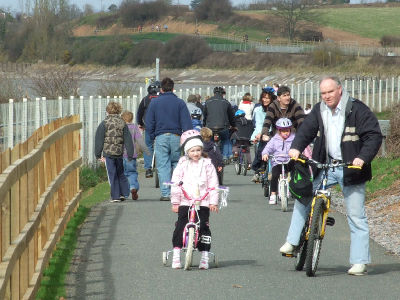 Taking a break on one of the slopes

Fortunately the weather was fine and the new trail was packed with cyclists and walkers - although some walkers decided to use the old, and now quieter, footpath right alongside the estuary.

In the last month some new seating and a sculpture have been installed beside the trail.

The seating is sited on one of the 'view points' where the trail rises high above the rail line to give clear views out over the Exe Estuary to Powderham, Starcross and Cockwood on the other side. 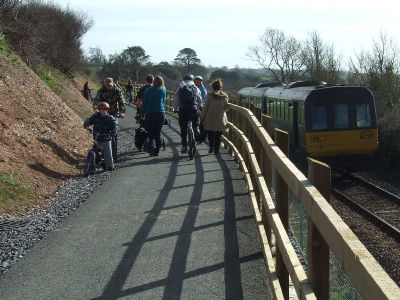 When the Lypstone-Exton, Exton-Topsham and Turf Lock-Powderham sections are complete it will be possible to cycle from Exmouth to Starcross away from traffic and then return by ferry or train.

The surface of the trail was constructed from recycled material from roads and the surface finish is sufficiently smooth for all types of bike. It is also allow easy passage for electric invalid buggies and wheelchairs. 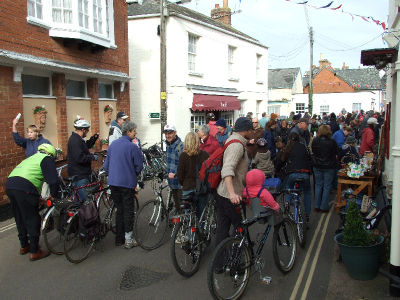 Crowds filling the Strand in Lympstone

In Lympstone the centre of the village had sensibly been closed to through traffic.

The Strand was packed with both villagers and visitors.

The band provided entertainment and stalls lined both sides of the street.

Cyclists could collect their second stamp to show that they had completed the route and also pick up recycling bags to further lower their carbon footprint.

Plenty of food was on offer - from cold ice creams through to hot dogs. Free mince pies were being handed out which the purveyor claimed were left over from Xmas - but they tasted OK.

Other stalls offered face painting, cards and a history of the village and one of the pubs was advertising a hot open fire. 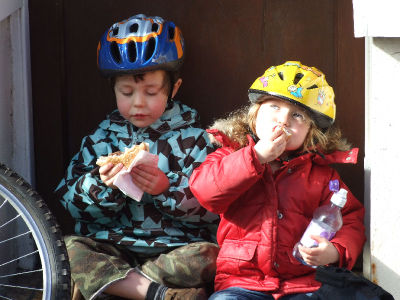 Signatures were being collected to support the campaign to save the village Post Office from closure and other villagers were encouraging people to sign up for the Lympstone Furry Dance which takes place in August every year.

The local policeman had arrived on his official police bike - but he admitted that its rim brakes weren't nearly as good as the disk brakes on his own mountain bike.

Disappointingly he didn't have flashing blue lights and a siren.

During the day nearly 500 youngsters claimed their goodie bags for successfully completing the trail ... it will be interesting to see, when the cycle counters are read, how many people were attracted to try out the new path.