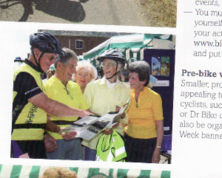 A reminder that Cycle Sunday is being held this year on 22nd June on the Flowerpot Playing Fields opposite Miller's Crossing in Exeter. As well as the usual attractions (Dr Bike, MTB trial bike demonstrations, Cycling Circus, and stalls) a sponsored 6 or 12 mile bike ride will be held in support of the local FORCE cancer charity. Participants in the charity ride can start at any time between 11:00 and 14:00 and will be eligible for free refreshments at the Turf Hotel.

Cycle Sunday is of course the final event of Bike Week. Full details of Bike Week are available on-line but highlights include 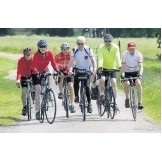 A full page article and photos appeared in the paper on Saturday 14th June.

A separate sidebar advertised the attractions of the Coffee-Pot runs.

A copy of the text of the article is available locally.

The NSPCC are organising a series of rides around the country in support of the National Society for the Prevention of Cruelty to Children and Childline. One local event will be along the Lympstone-Exmouth Bike Path starting at 2 pm on Sunday 22nd June. The start is at The Paddock, Sowden House, Longbrook Lane, Lympstone (Longbrook Lane can be found by following the road at the northern end of the bike path away from the Estuary). Entry costs just £1 and there will be free goodies available as well as prizes for the best decorated bikes and helmets. See also http://bigbikeride.co.uk/

Debbie Ironside-Smith hosted a Coffee Pot ride on 29th May to raise money for the Multiple Sclerosis Trust. Picures and a report are on-line.

Debbie is taking part in a London to Paris ride in July 2008 to raise money for the Multiple Sclerosis Trust. Please visit her web page if you would like to help her reach her target. You can also read a blow-by-blow account of Debbie's training regime at http://debbiesbikeride.blogspot.com/.

More from the Spurrs 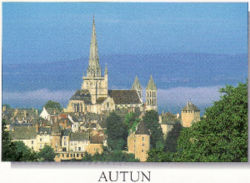 On 16th May Roger Spurr wrote

Even More from the Spurrs 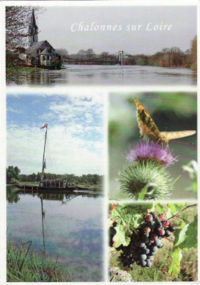 On 29th May Roger wrote

Dear All, Ah the lovely Loire! It's not all been easy going but we've had a few days downhill with the wind behind us so even the evening thunderstorms (big and noisy) haven't dampened our spirits. Should reach the Nantes-Brest canal tomorrow - Last lap! All the best, Roger and Marylyn

Over 6,000 people have visited CTC Devon's on-line cafe list. The cafe list also available as a Word document which can be printed out on a single sheet of A4.

The CTC HQ have recently taken a copy of the list and it will soon be appearing within the national list on the CTC's Cyclists Welcome Web Page.

If you have a recommendation for a new cafe to include - or have had a bad experience at one of the ones listed - send details to Kirby James.

Exeter Beyond the Car

On Thursday 2nd July Peter Lipman (Sustrans and the Centre for Sustainable Energy and Transition Network) will be giving a talk entitled Exeter Beyond the Car at Exeter Central Library starting at 7pm. Admission is free but donations are welcome.

During the week 30th June - 5th July Sustrans is running its annual Change Your World campaign.

The message behind the campaign is simple - if each of us swap just one car journey during the week of 30th June - 5th and walk, take public transport, or cycle instead, we'd take a massive 10% of traffic off the road.

More information is available at the campaign website at http://www.changeyourworld.org.uk and in the Change Your World Information Pack.

CTC is urging members and supporters to take action to dissuade Arriva Cross Country (XC) from going ahead with proposals to reduce capacity for cycle carriage on their trains - and to contact MPs to press the Government to ensure that cycle-rail integration is enhanced not diminished.

Cross Country routes run via Exeter St Davids to locations such as Aberdeen and Penzance, providing useful long and short distance links for cyclists. They currently provide 4 cycle spaces on their 'Voyager' trains. However they now intend to introduce a limit of just 2 cycles on all their trains, even though they are adding several 'High Speed Trains' (HSTs) to their fleet with space for 6 cycles in each guards van.

If you are a user or potential user of Cross Country services please email Arriva to register your concerns. Describe the kinds of journeys you would like to make on Cross Country services - impress on XC that cyclists are valuable extra customers at less busy times and less busy places. In an interview in Modern Railways (May, 2008), Andy Cooper (MD of Cross Country) stated that "We've got more seats on these HSTs than a jumbo jet and we've got to fill them up". People wanting to go cycling might be just the customers he is looking for!

Please also write to your MP, urging him/her to press Ministers to ensure XC retains or enhances the existing provision for cycle-rail travel.

More information is available at at the CTC Web site.

A Date for your Diaries

2 July: Exeter Beyond the Car - a talk by Peter Lipman at Exeter Central Library starting at 7pm

9 September: Tour of Britain in Somerset and Devon