A planning application has been submitted to Dartmoor National Park Authority for a new trail from Bovey Tracey to Moretonhampstead.

The proposed trail will be open to cyclists, walkers, and horse riders, and will use much of the disused rail line which runs up the Wray Valley through Lustleigh. The Moretonhampstead Development Trust have produced a sheet of background information about the proposal.

The direct route from Bovey to Moretonhampstead involves the busy A382 which is a narrow winding road which presents dangers even to experienced cyclists. The alternatives involve climbing up through Manaton and North Bovey or climbing up past the Kennick Reservoirs. Neither route is suitable for youngsters or less fit cyclists.

The proposed route will provide a safe, level, attractive route up onto Dartmoor from the areas around Bovey and Newton Abbot for both residents and visitors. As the new sections of the Exe Estuary Trail have demonstrated such routes also allow the less able in wheelchairs and mobility scooters access to the countryside.

When the planning application for the Exe Estuary Trail through Exton was considered earlier this year over 100 people wrote in support - let's see if we can beat this number.

Just a reminder that if you want to comment on the Cycle Strategy for Exeter the current draft of the document is available on-line.

If you have any suggestions on items that you would like to see included in the strategy - please send them to CTC Exeter's Secretary before 30 August in the first instance.

Over the last two years the Guardian newspaper has been running a campaign called Free Our Data.

Currently government-funded and approved agencies such as the Ordnance Survey, the UK Hydrographic Office and the Highways Agency collect data (e.g. mapping information) on our behalf. Then they charge us for the use of this data. This is in contrast to Google maps who make their mapping data available for free.

As well as the public, local authorities and other agencies such as the Environment Agency have to also buy this data. The Guardian's contention is that there would be a net benefit to the UK as a whole if this data was made freely available. 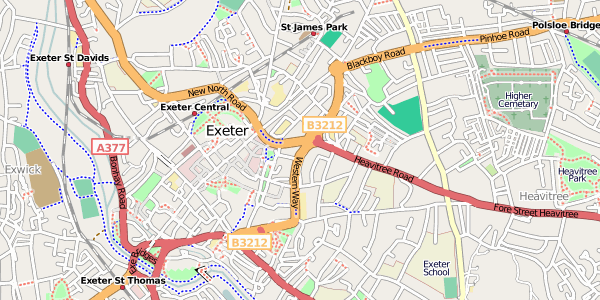 As a modest contribution to this campaign a free map of the world - called OpenStreetMap is being developed. The images above and below show the current map of the centre of Exeter and the countryside east of Exeter. 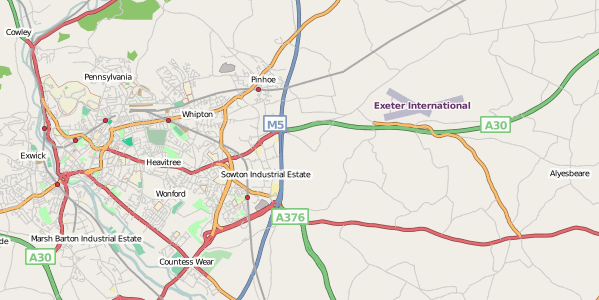 If you record GPS tracks whilst cycling or walking, and wish to follow in the footsteps of Mercator, you can either upload them to OpenStreetMap or email them to Exeter CTC's Secretary who can do it on your behalf. 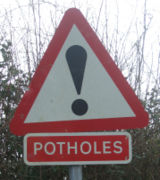 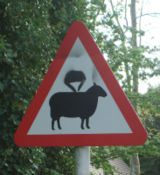 It's worth making sure that you are familiar with the latest copy of the Highway code - especially the newer road signs that are being introduced.

Somerset County Council have introduced new signs warning cyclists of potholes ... as this example spotted near Sutton Bingham shows ... this has the benefit that it saves tax payers the cost of repairing the holes.

Meanwhile in Herefordshire parachuting sheep are becoming a bit of a pest. Single sheep are quite easy to avoid ... but a parachuting flock is rather more of a challenge ... just remember to wear your helmets. 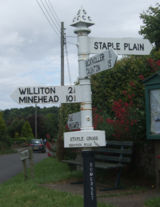 If you think you've been getting lost on your bike more recently than in the past - I think I know the reason why.

Devon County Council has reported that 100 road signs made of aluminium went missing in just one night. In Exeter, over the past six months, more than 500 signs have been stolen or tampered with.

In another incident a 19-year-old student ripped the Heavitree Road Police Station sign off its stanchion. He was discovered by an observant policeman carrying it down the road.

The spate of thefts is driven by the high price of aluminium - currently £640 per tonne. I'm just glad my bike has a steel frame. 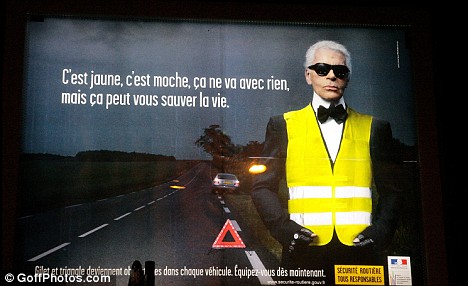 It's not often that high fashion features in the CTC Exeter Newsletter ... in fact it has never happened before ... and may well never feature again.

Karl Lagerfeld, the 74-year old Chanel designer, has backed a new campaign for safety on French roads ... he is shown wearing a fluorescent cycling jacket in a new series of adverts.

Largerfeld is known for his love of black suits, gloves and dark glasses so it's quite a surprise that he has donned a yellow jacket ...

It’s yellow, its ugly, and it goes with nothing, but it can save your life.

The British Heart Foundation is holding a series of Big Off Road Bike Challenges. The South West Randonnee is being held on Saturday 6th September This 60/80 mile circular mountain bike challenge includes single tracks, uphill climbs and downhill sections over both the Quantocks and Exmoor National Park. The routes involves over 14,000 ft of ascent. More information is avaiable on their web site.

For the last few years the Exe Estuary Management Partnership have produced an Exe Explorer leaflet which describes the Estuary in general terms and transport options for accessing it.

The Partnership is now producing a number of more detailed leaflets the first of which - Exe Activities - describes the range of activities which can be undertaken on or around the Estuary.

Cycle clubs - including CTC Exeter - and cycle hire locations around the estuary are featured in the new leaflet.

The leaflet is available from local Tourist Information Offices.