Forty one cyclists at the start

On the 10 May Axe Valley Peddalers hosted a joint ride with CTC Exeter. The ride was a great success attracting forty one cyclists for the ride through bluebell woods to Lyme Regis. A full report on the ride is available on-line. 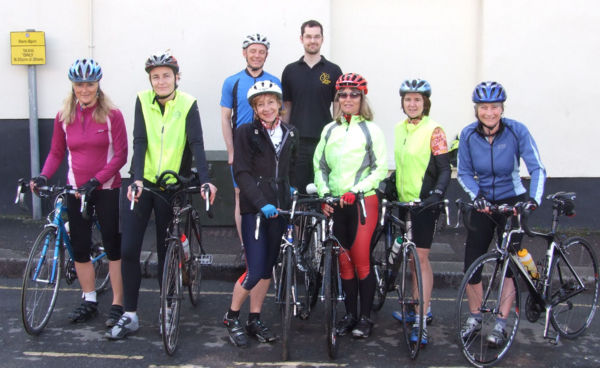 The Girls about to set off from the Bike Shed

For some time now the Bike Shed, Fore Street, Exeter has been offering group rides for their clients both on and off road.

A recent initiative has been a road ride to promote women's cycling. This group welcomes new riders and meets at the Exeter Bike Shed at 9.30am on Saturday mornings. Rides range in distance between 25 and 40 miles, often including a café stop.

Having recently purchased a racing bike, this women's group has introduced me to like minded riders whilst adapting to a new cycling discipline said Pippa Wheeler a regular member of the group.

To join in, simply turn up ready to ride or contact Luke or Greg at the Bike Shed on 01392 426 191 or mailto:bicycleman@blueyonder.co.uk 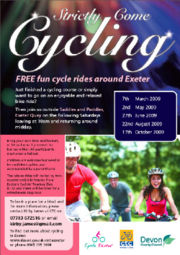 One of the Series of Leisure rides branded 'Strictly Come Cycling' was held on Saturday 2nd May. This attracted twelve new cyclists who were guided down to Turf Locks and back by CTC members Liz, Sarah and Kirby. 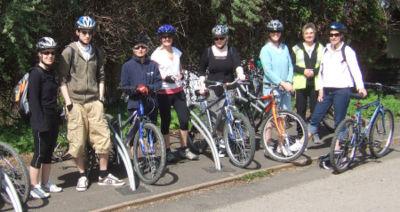 Getting ready to return from Turf Lock's Hotel

On each Saturday following Cycle Exeter's eight week Adult Cycling Sessions the CTC lead a leisure ride from Exeter Quay to a nearby cafe. Although these rides are targeted at participants in the Adult Cycling Sessions - other cyclists are welcome to join in. Full details are available on this web site and in the form of a poster.

The next Leisure Ride will be on Saturday 27th June. 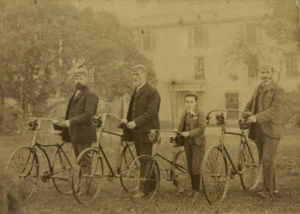 A rare photograph of some of our predacessors has been discovered in the Devon Local Studies Library in Castle Street, Exeter.

It shows members of Exmouth Cycling Club posing in the Manor Grounds. The Manor itself was demolished in 1894 - and the picture was taken earlier the same year.

Note that they were all wearing flat caps - not helmets - and that their bikes were all equipped with lights.

On 31 March a new section of the Stop Line Way near Bawdrip was opened. Project Officer, Kim Goonesekera, writes:- 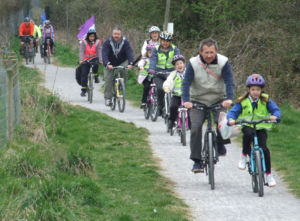 A group cycling home after the official opening

The Stop Line Way is a long distance walking and cycling route with wheel chair user and horse rider access where possible. It will run from Weston-super-Mare to Seaton in Devon via Burnham, Highbridge, Bridgewater, Taunton, Ilminster, Chard and Axminster. The route will be pproximately 75 miles long and it largely follows the old World War II line of defence against a potential German invasion. Along the path are old pill boxes, tank traps and anti tank islands. The section from Brean to Taunton is complete as is the section from Ilminster to Chard. There is also a small section running north from Seaton.

I am in discussion with about 17 landowners and tenants on several different sections of the route in both Devon and Somerset. On 31 March we ahd the grand opening of the section at Bawdrip, where the route had been closed for some while.This means that it is now possible to cycle along National Cycle Network 33 from Taunton to Bridgewater, Burnham-on-sea and up to Brean.

Double Dose of the Tour of Britain for the South West

The route in the South West

This September the South West will get to see two days of racing in the Tour of Britain.

On Thursday 17 September Stage 6 of the race will be run from Frome to Bideford.

On the following day Friday 18 September the route on Stage 7 is from Hatherleigh to Yeovil. The route yakes in Okehampston, the B3260 to Crediton, the A3072 to Bow and Copplestone, and the A377. There riders will pick up the A3072 to Cadbury and on to Tiverton. The route then goes through Willand, on to Cullompton, Honiton and Sidmouth. After Sidmouth they climb Trow Hill - which earns King of the Mountain points - and then travel through Seaton to Axminster.

More details are available on the Tour of Britain web site. The race will be televised by ITV 4.

A reminder that during the afternoon and evening of Thursday the 28th of May, Exeter City Centre will be hosting one of the most exciting events it has seen in recent times.

The route will be along High Street, Queen Street and New North Road.

The race is taking place in the evening, but from the early afternoon a festival atmosphere will be created in the City with displays, stalls, activities and perhaps some mini races for children and the general public. The oultine timetable is

On the day of the event - all the Park and Ride facilities will be free!

Those of you have stood outside the refreshment van on the top of Haldon Hill be be pleased to know that the new (indoor) cafe has now opened.

Work is also underway to create additional mountain bike trails at levels intermediate in difficultly between the existing ones.

A new path is being constructed across the King George V Playing Fields which will allow cyclists to 'cut the corner' between Topsham Road and Bridge Road - and to avoid the busy Countess Wear roundabout.

An application has been made for a 1 km long cycle path along the Ludwell Valley linking Topsham Road to Lugwell Lane and to the existing path from Wood Water Lane. A further application is likely to be made to extend this path through the golf course to link to the route alongside the eastern bank of the Exe.

The soil stability problems which have led to small landslides are due to be addressed in Ausust and September. A condition of the work is that the trail should not be closed.

Work on the lengthy sections of boardwalk is now complete. After a break due to the bird breading season - work has started again at the Exton end. The path should be complete by Xmas - with an official opening in the new Year.

Planning consent has recently been obtained for this section. Many thanks to all those who wrote in to support the proposal. A condition of the approval is that some more work must be undertaken to lessen the visual impact of the new bridge over the rail-line which will replace the current unmanned pedestrian level crossing.

The markings and islands which were installed two years ago are being removed and the section is being resurfaced. This section is likely to become a shared 20 mph zone.