Christian Aid are organising a bike ride on Sunday 3rd October. The ride starts at Woodbury Park Golf Club and will visit Devon, Somerset and Dorset. Riders will have a choice of 48 mile or 70 mile routes.

A poster describes the ride in more detail and entries can be accepted on this form. 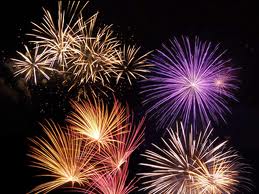 Join us for a Night Ride to Turf Locks for the Bonfire Bonanza on Saturday, 6th November ... www.turfpub.net.

The ride starts from the Cathedral Green in Exeter and takes the canal-side path down to Turf Locks. The Axe Valley Peddalers will be joining us for this ride. 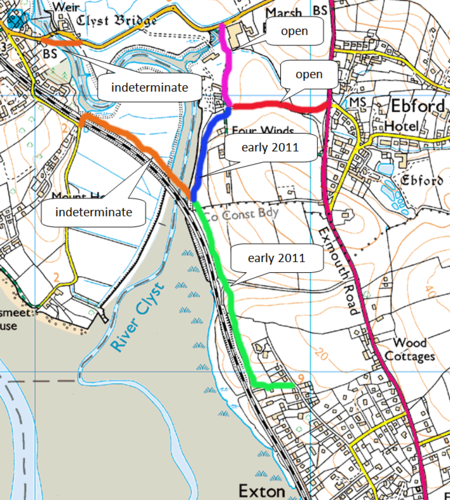 The planning application for Odhams Link has been approved subject to final consultation with Natural England. This link will run between the mouth of the Clyst and the rear of the industrial estate on Odhams Warf (shown in dark blue on the adjacent map).

Construction of the link between the mouth of the Clyst and Exton Village is underway (shown in green) and is scheduled to complete early in 2011. It is hoped to be able to start work on Odhams link in parallel so that the complete route between Exton and Dart's Farm can be opened in early 2011.

Following numerous complaints about the vicious speed bumps in the link to Ebford crossroad (shown in red) cut-outs are being made for cyclists. As the road is single track the opportunity is also being taken to construct some passing places so that commercial vehicles can pass cyclists and cars safely.

A planning application is being prepared for a pedestrian/cyclist bridge adjacent to the narrow stone bridge alongside Fisher's Mill. No funding has been allocated to this bridge nor to the proposed bridge alongside the rail bridge at the mouth of the River Clyst (both shown in orange).

After the 'Future of Transport in Exeter' consultation held in March and April this year a summary report has been produced and is available online at http://www.devon.gov.uk/futureoftransportinexeterfullreport.pdf. The sections dealing with walking and cycling can be viewed here.

The results show that there is support for the cycling strategy, Project Exe-press, Park and Ride proposals, further rail investment and selected road improvements. There is also useful feedback on public acceptability of a range of other measures aimed at managing traffic growth, which could be introduced to help keep Exeter moving and reduce carbon emissions. These results and feedback / suggestions from the public and businesses will be used to inform the Exeter Transport Strategy, which will be part of the next Local Transport Plan 2011-2026 (to be adopted by 1st April 2011). It will also feed into the work on the City Centre Transport Study, which is being progressed in partnership with Exeter City Council.

At the time of producing this report, there is some financial uncertainty about future funding for major transportation schemes. This will become clearer after the Government’s Comprehensive Spending Review in October. The County Council will need to make use of a range of funding sources to help deliver housing and jobs and support economic growth in a sustainable way. This will include using Local Transport Plan funds, developer contributions and other central Government funding initiatives. The future transport solutions for Exeter will need to be innovative, offer good value for money and be delivered in a more flexible way.

Bookings can be made using this form. Numbers are being restricted to 50 - so book early if you want to guarantee a place. 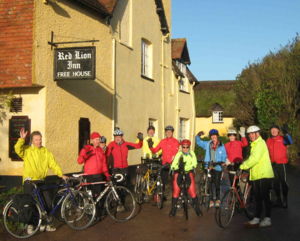 More information is available on-line and bookings can be made using this form. 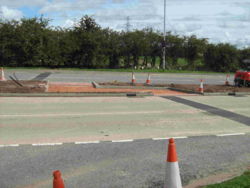 Work continues on a Toucan Crossing of Sidmouth Road at the junction with Clyst Road (at the site of the "Agricultural Crossing"). This is a popular commuter route from Clyst St Mary, past the Blue Ball towards Exeter.

The new crossing is due to open at the end of October. 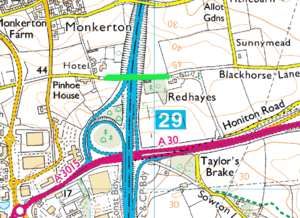 Construction of the piers is scheduled to complete in December when the bridge span will be lifted into place.

The complete route from Exmouth to Exton is now open. During the first half of this year this section has seen over 15,000 cycle movements per month.

See above for details of the remaining section to Topsham. Please note that the only way to cycle from Exton to Topsham at present is along the busy A376. An alternative is to cycle along the shared use pavement from the traffic lights alongside the old Ebford hotel ... and then to walk the narrow section past the petrol station which is not shared use. 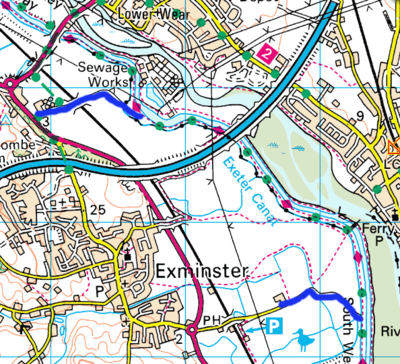 Work is underway to surface the lane from Exminster (Station Road), which runs past the Swan's Nest Pub and Toby's reclamation yard, to provide a continuous link to the Exe Estuary Trail (shown in dark blue on the adjacent map).

The lane which runs from the oil depot on Dawlish Road is also being re-surfaced (also shown in dark blue).

Both lanes were very rutted and completion of this work will allow greater access to the Estuary Trail and allow new leisure cycle loops to be developed.

Complete. A 20 mph limit has been imposed between Starcross and Powderham Church - but the signs have been stolen for a second time.