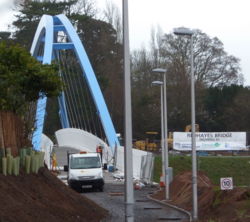 The new Redhayes Bridge was lifted into place in February. Work has since been continuing on finalising the decking and constructing the approach tracks. It is hoped that the new route can be opened in April. 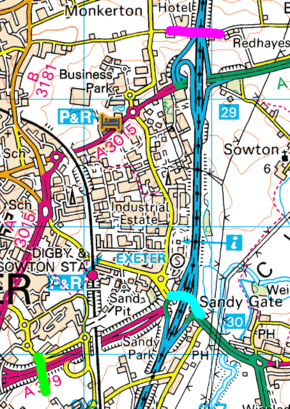 The bridge (shown in pink on the map) will connect Gypsy Hill Lane (alongside the Gypsy Hill Hotel off Pinn Lane) to Blackhorse Lane and Honiton Road on the east of the motorway immediately north of Junction 29.

This will provide a cycle route to the new developments, such as the Science Park, the Air Park and Cranbrook, which are beginning construction east of the M5. 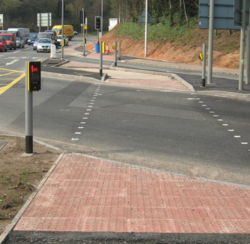 The final phase of improvements to Sandygate roundabout is nearly complete. A new split crossing (shown in cyan on map) has been built across the northbound on-slip to the M5 (see adjacent photo). This is much safer than the previous dash across the road between the traffic. Note that pressing the button won't make the lights change any quicker (except at night!). In contrast you won't get a green man on the off-slip lights (towards Clyst St Mary) unless you press the button.

The closure of the popular commuter route up Old Rydon Lane is due to be lifted on 9 April, although this date keeps slipping. 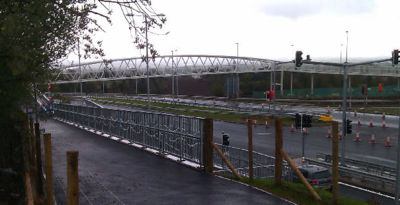 A second new bridge has been completed over the Sandygate Link dual carriageway (green line on map above).

It links the Rydon Lane Retail Park and Digby & Sowton directly with the Newcourt developments south of the dual carriageway.

The bridge will be opened in the next month when the new link road to Old Rydon Lane is complete.

Roy has already complained about the surface finish on the new path leading up to the bridge. If you have any comments on this please send an email to Devon County Council with a copy to Roy.

Autumn and winter have been full steam ahead in Bike It schools despite the cold weather. In their Newsletter you can see

Planning permission was given on 26th January by Devon County Council for a new section of the Granite Way.

The plan is to continue the off-road section of the Granite Way 1 km west of its current termination on the A 386 (shown in pink on map). When completed cyclists will be able to avoid a fast section of the A 386 or a long and hilly detour via Bridestowe.

Daily timetables and the route are still being finalised, but will include Barnstaple, Ilfracombe and the main beaches in North Devon. The bus is a converted double-decker - the seats have been removed downstairs to allow surfboards and bikes to be loaded and passengers travel upstairs.

The bus featured in an edition of the Countyfile programme last month. 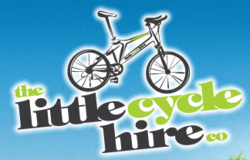 This is an example of how new shared use cycle and pedestrian routes open up both business and leisure opportunities.

The outlet is conveniently sited at the rear of the Strand pub on the opposite side of the roundabout from Exmouth Station. 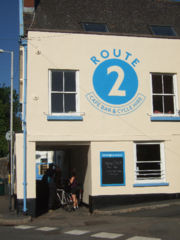 The painted signs on the outside of the popular Route 2 cafe in Topsham will shortly be painted over at the insistence of the City Planning Department, in spite of a large petition which attracted over 850 people in support.

See article in Express and Echo.

The Force Charity Ride from Topsham to Exmoor and back takes place on 26 June. Further details on the website

Both rides start and finish in Seaton and take in the (rather hilly) coastal road between Otterton and Seaton. The 100 km ride includes around 2,000 metres of climbing (Mt Ventoux is only 1,912 metres high!!).

This year is the 150thanniversary of the Exeter to Exmouth rail line (the Avocet Line).

A range of activities are being held along the line to celebrate including a beer festival in Lympstone and a special train which may be steam powered.

There will be a Sustainable Transport Fayre in Exmouth's revamped Strand Gardens between 11.30am and 3pm. The Fayre will feature stalls, stands, exhibits, a guided walk, musical performances and a cycle activity lead by Sustrans.

This year Bike Week is being held from 18th to 26th June.

Look out for activities in your area. 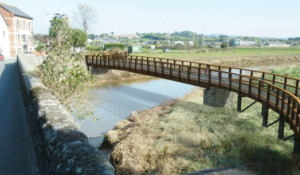 The final link from Exton through to Dart's Farm, although physically complete, awaits signing of the relevant access agreement with the landowner.

It is hoped to start work on the new bridge alongside Fisher's Mill during this summer.

Conditional planning approval has been obtained and negotiations completed with Network Rail about details of the bridge. Negotiations are continuing with local residents and construction is scheduled for 2012/13.

Work has started to clear vegetation on this route. Construction work will start after Easter with completion scheduled for end Summer 2011.