The new bridge spans for Fisher's Bridge, just outside Topsham, were lifted into place on 7 September (Photo right). Completion of remaining work including cycle route signing in Topsham is expected by early October. This will provide a safe route around the narrow River Clyst Bridge.

Work is also underway on a new Toucan crossing opposite Darts Farm to link to the Exe Estuary trail.

Investigation is underway into widening the shared use path between Fishers Bridge and the Odham's Link turn opposite Dart's Farm. 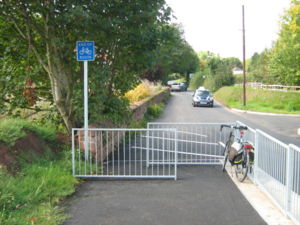 Old Rydon Lane was finally re-opened in August, together with a new link road towards Tesco and a new bridge over the Sandygate Link dual carriageway. Devon County Council are considering removing the unnecessary barriers erected by the developer on the cycle path (photo left). The quality of tarmac finish on the bridge approach ramps has also been criticised. 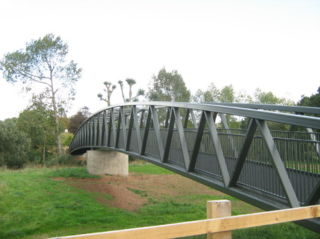 The new bridge over the Otter opened last month and provides a safe route from town to King's School and the Hospital (Photo left).

Proposals to build on land at Hill Barton Farm in Exeter will be displayed at a public exhibition on Tuesday 27 September. These are likely to affect cycle routes from Redhayes Bridge into Exeter.

The exhibition is being held at the Holiday Inn near the Barn Owl, from 2pm until 8pm.

Further details including where to find a free breakfast can be found at www.devon.gov.uk/devoncarfreeday. 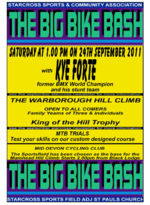 Crediton 'Legs It' is a unique event that will take place on Saturday 24th September starting at 10am in Town Square Crediton. It is organised by the Sustainable Crediton Transport Group and is an opportunity to have fun walking, running, cycling, skateboarding and scootering around Crediton in the company of like minded people.

For cyclists there are 3, 7 and 10 miles loops. More information is available on the Moving Planet web site or directly from the organiser Laura Conyngham on 01363 773 000. 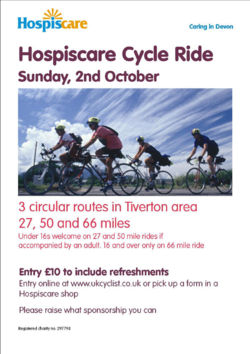 Celebrate the end of British Summer Time and Halloween, by entering the annual Dartmoor Devil. Details at www.dartmoordevil.co.uk 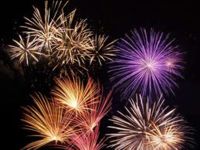 Cycle ride to Turf for the annual bonfire and fireworks. Click here for details 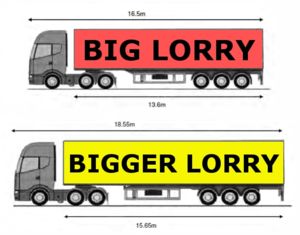 The Department for Transport intends to increase the maximum length of lorries to 60 feet. Is this a good idea?

Please write to your MP asking him to oppose this move. Click here for further details.

The CTC Right to Ride network is the largest group of voluntary cycle campaigners in the UK. Roy Russell is the Right to Ride Rep for Exeter and can be contacted by email.

Vehicles on Shared use Paths 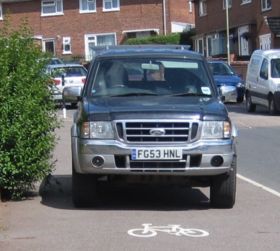 Exeter Councillor Moira MacDonald is concerned about the increasing number of vehiles parked on paths within the city - which then present a hazard to pedestrians, the disabled and to cyclists on shared use paths.

If you find that this is a problem in your area Moira would appreciate a photo of any offending vehicles - it is important to note the location and date & time.

Any photos and supporting information should be sent to Moira MacDonald

A significant number of complaints were made about the closure of the Sidmouth Road Toucan crossings during the Devon County Show. Devon County Council have agreed to consult with cyclists next year before the show about possible restrictions on these crossings.

Devon County Council has appointed a consortium of Devon cycle training organisations to provide free Bikeability training to up to 6,000 pupils in this financial year.

The new bridge was lifted into place on 7 September. Remaining work, including new cycle route signing in Topsham, is expected to be complete in early October.

The proposed bridge across the mouth of the River Clyst by the railway is programmed for 2013/14.

No change. Negotiations are continuing with local residents and construction is scheduled for 2012/13.

This section was opened on 25 August in time for the Bank Holiday. 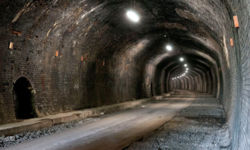