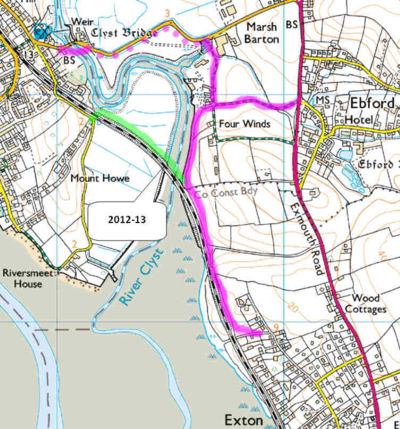 A planning application has been made for the final section of the eastern half of the Exe Estuary Trail passing Goosemoor and incorporating a new Clyst Bridge. Click here for details

The map shows (in pink) the existing shared use (walking/cycling) paths from Exton, alongside the River Clyst, past Odham's Wharf and Tremlet's Boatyard, adjacent to the road between Clyst St George and Topsham, and over the existing bridge adjacent to Fisher's Mill and the Bridge Inn.

The proposed new section (shown in green) will cross the River Clyst on a new bridge immediately upstream of the existing rail bridge, then pass through Goosemoor on a boardwalk and turn through the existing brick arch bridge under the railway to emerge on Bowling Green Road.

Construction of the bridge and boardwalk will take 12 months scheduled over two years to avoid critical bird nesting periods.

Comments on the planning application must be made by the end of February. Click here to comment

The Breeze network from British Cycling is all about fun, local bike rides for women, by women. Breeze are organising a series of short local rides at an easy pace.

The rides are led by Caroline Jones who is a trained national standard cycle instructor and level 1 cycle tour leader (British cycling). You can read more about Caroline on her blog.

There are four rides planned for Saturdays in February - the rides are free but do require prior registration (click on the dates below for further information). 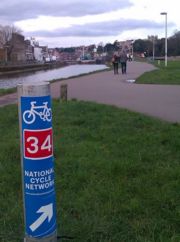 Locally it passes through Exmouth, along the Exe Estuary Trail through Topsham (past the Route 2 cafe) and up to Countess Wear where it runs along Bridge Road (past the Swing Bridges) and down the west side of the Exe through Powderham, Cockwood and onto Dawlish.

The numbering has now been rationalised and the section up to the Quay is now called NCN 34.

Bike It Success in Exeter 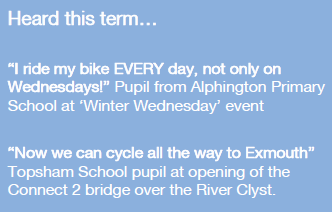 Martin Burrows the Sustrans' Bike It Officer in Exeter writes:-

Results for Exeter schools in their third year of Bike It in 2010-2011 show that the project has continued to build upon its success in increasing cycling levels. The percentage of pupils regularly cycling to school more than doubled between 2008 and 2011 from 11.0% before engagement to 21.9% after one year of engagement, 23.6% after two years of engagement, and 25.4% after three years of engagement in Bike It.

Read more about Bike It activities in their Autumn Newsletter.

The Times newspaper has launched a public campaign and 8-point manifesto calling for cities to be made fit for cyclists:

If you wish to support this campaign more information is available on-line. 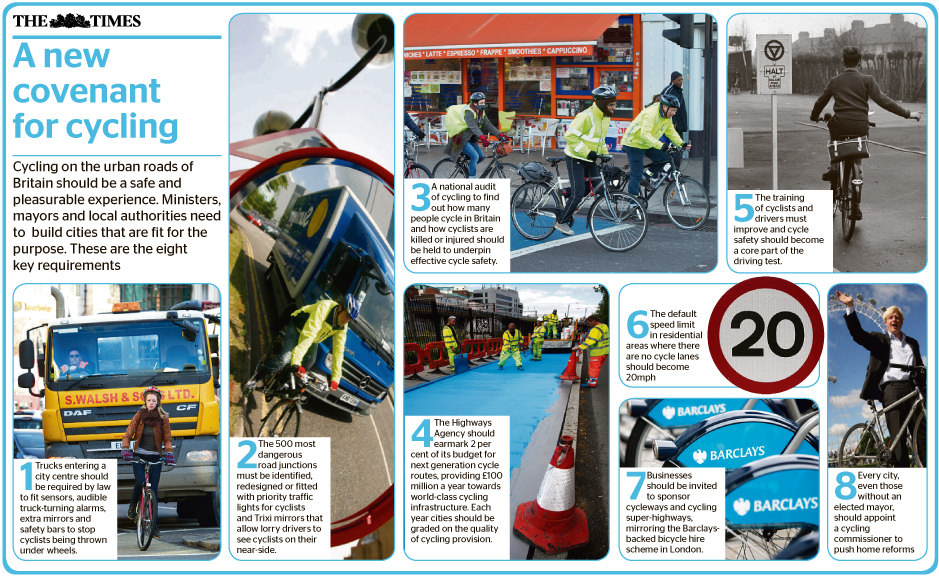 The popular Ridge Cafe at the Haldon Forest Centre also closed unexpectedly at Christmas. The Forestry Commission are looking for new tenants to run the cafe. If you're interested, offers are invited by 3 February with the intention to reopen by mid-March. Click here for further details. 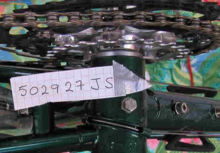 32 bikes have been stolen in Exeter in 2 weeks.

This is an unusually high number and may be due to an organised gang.

Only two of the unfortunate owners had recorded their frame's serial number. The Police are urging cyclists to record their bike's serial number and take photos of their bikes (especially any distinguishing features) to increase the chances of recovery.

Paul Nero, the Managing Director of Exeter FM caused a minor media storm when he criticised cyclists for not using cycle paths.

His comments attracted over 150 responses to the Express & Echo website. A response from the SW Director of Sustrans was published the following week.

He was contacted by Sustrans and Stuart Hughes (Devon County Council Member for Highways and Transportation) and a discussion of cycling issues will be broadcast on Exeter FM on Saturday 18 February at around 4 pm.

This summer could be a breakthrough for the cycling world, as it has seen an outbreak of co-operation. Twenty three cycle organisations (including the CTC) have agreed to promote the Summer of Cycling.

Details of exactly what this promotion will entail are still being worked out and will be published on the website www.summerofcycling.net 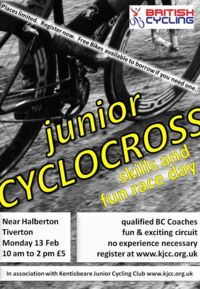 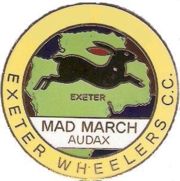 Orienteering event around North East Exmoor from Minehead. This event is designed to test both navigational and biking skills. There is a 3 hour competitive event and a 2 hour family fun event. They are intended to provide an enjoyable recreational ride, with the level of challenge decided entirely by yourself.

CTC Devon are organising a 50 mile ride over Dartmoor as part of the annual Tourist Competition. Click here for further details.

The Hammer is a challenging 130 km cyclosportive through the quiet roads and country lanes of the South Hams. This is a new, non-commercial event with 25% of all entry fees going to Diabetes UK.

Further details on the website www.southhamshammer.co.uk or preview the route here.

Mud and Sweat are organising a Mountain Bike event on Sunday 1st April on Woodbury Common, near Exeter. Courses comprise 3.5 hour and 2 hours for Solo's, Pairs and Families, with all courses using waterproof OS 1:25,000 maps.

Cycle organisations meet with Mike Penning, the "Minister for Cars" 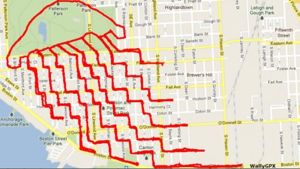 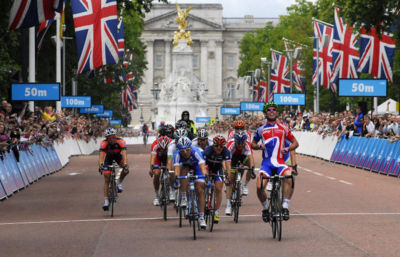 Olympic cycling in the past

Annual 2 day festival to start in 2013 as Olympic legacy