To celebrate the opening of Hospiscare's new day care centre in Tiverton two charity rides are being held on Sunday 30th September.

There is a 'Family Ride' of 27 miles to the Barle Valley and back. This is suitable for families, youngsters and beginners and there will be the option of riding with experienced leaders. This ride starts at 09:45 from Blundells Rd.

The longer 'Ride to the Coast' is 66 miles to Watchet. It provides stunning views and a real sense of achievement. There's a choice of cafes in Watchet to fuel you for the return journey. Please fit lights for this route. This ride starts at 09:25 from Blundells Rd.

You can enter on-line or pick up an entry form from any Hospiscare shop. 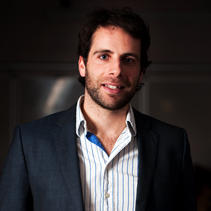 Round the World cyclist Mark Beaumont is giving a talk at the Barnfield Theatre, Exeter on Friday 19th October.

In 2007/08 Mark established the then record for the fastest circumnavigation by bicycle - 18,296 miles in 195 days. In 2009/10 he cycled the length of the Americas - climbing Denali and Aconcagua en-route - and incidentally filming the whole expedition to make a three part BBC1 documentary.

This year he was a member of a team attempting a mid-Atlantic World Record attempt. They capsized just short of completing the crossing and ...

... you'll have to attend the talk to find out what happened next. 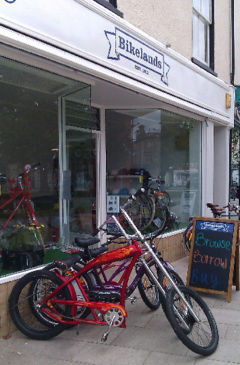 In Exmouth a colourful new bike shop called Bikelands has opened on The Strand (the large open square at the centre of town).

They are specialising in cruisers, uprights, roadsters and fixies - both to buy or to hire. As well as bikes they stock books, cards, artwork, cool clothes, retro accessories and quirky allsorts - all inspired by bikes.

At the moment they are stocking bikes from Linus, Bobbin, Electra and Create. 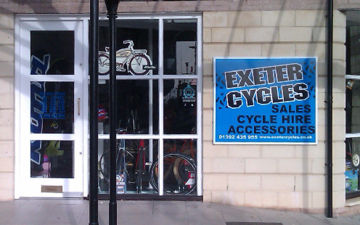 Exeter Cycles, who have been operating in Topsham Road, Exeter for just over a year, have opened a new outlet in Piazza Terracina adjacent to the new climbing centre.

The shop is in part of the premises vacated by the canoe shop. They will be stocking bikes from Kona, Merida, Claud Butler, Electra USA, Dawes and Falcon, plus the odd used bike.

As well as bike sales they will be operating a hire facility - and they also plan to add a coffee and cake shop shortly. 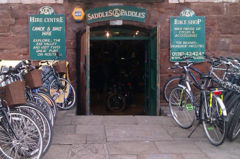 Meanwhile on the other-side of the river established retailer Saddles & Paddles is up for sale.

They offer both bike sales and bike hire. 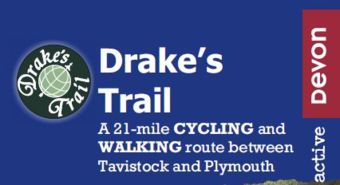 With the opening of the new Gem Bridge and the Grenofen Tunnel the cycle route between Plymouth and Tavistock is now complete. 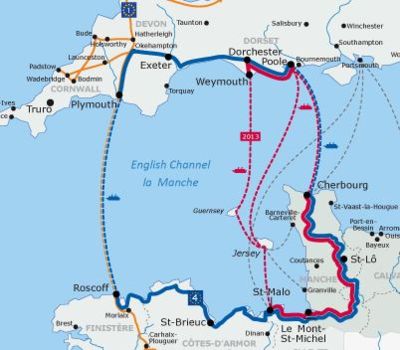 At its southern end the trail follows the existing Plym Valley trail, but the complete route has been branded the Drake's Trail after Sir Francis who was born in Tavistock.

A new leaflet is available which contains a map of the route together with detailed plans of the main access points.

which link Devon and Dorset with Brittany, Normandy and France's Atlantic Coast (when Brittany Ferries are working).

Historically, CTC stood for 'The Cyclists' Touring Club'. However while cycle touring remains hugely important to CTC, nowadays it also runs a whole range of charitable activities to encourage people of all ages, abilities and backgrounds to take up cycling, for day-to-day travel as well as for leisure. So, as it is now a lot more than simply a 'club' for 'cyclists', it is now known as 'CTC, the national cycling charity'."

It is over 10 years since CTC ceased using "Cyclists' Touring Club" for anything other than its touring-specific activities, or its formal Companies House registration.

Your chance to influence CTC locally: 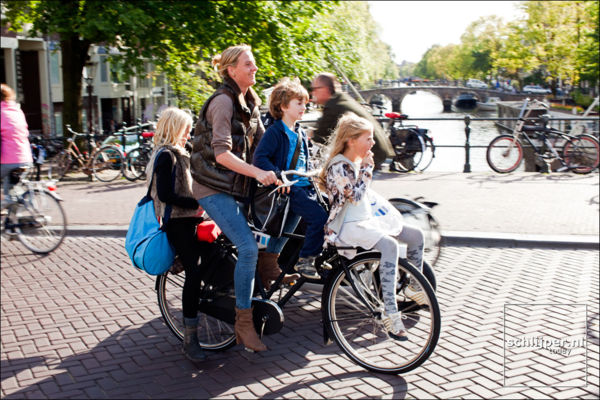