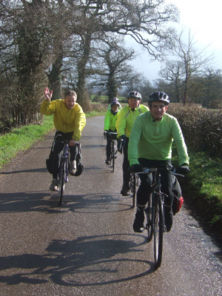 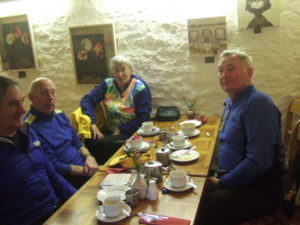 Six of us left Poltimore Gate heading for Bickleigh via Columbjohn, Rewe and Nether Exe. I chose a flat and fairly direct route because the big hills were coming later, after the coffee break.

We met some other Exeter CTC members at the coffee stop and Mike B decided to join up with the standard riders, rather than alternative. 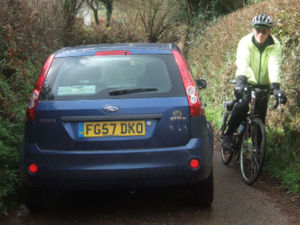 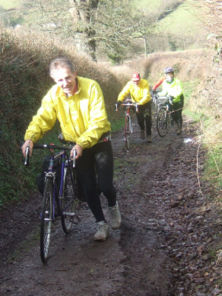 A rough section above Great Dorweeke

After going through Bickleigh village we climbed up a steep hill along a typical narrow Devon lane and a car was coming down the other way without even slowing down for the cyclists. Would he have done this had we been riding horses or if a four wheeled vehicle was coming up?

Eventually the car did stop and Mike had a few words with the driver regarding the lack of consideration shown. Although the driver appeared to have a negative attitude towards cyclists (sadly he is not alone), a nasty ending was avoided thanks to Mike’s handling skills in dealing with such people. 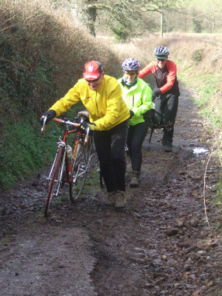 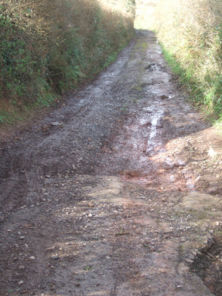 We carried on climbing, then down again towards the Burn Valley and Great Dorweeke. Up again an even longer hill and just as steep, along a neglected road with huge potholes, now becoming a track. According to the OS map this was meant to be a proper minor road, but we did see a sign “Unsuitable for motors”! Our bikes and our footwear/overshoes were already covered in mud before climbing up this track, so there was even more mud showing!

I believe it was worth it because there were splendid views of the Burn Valley and Butterleigh. Once we were at the top, Mike thought he better leave us and head downhill for Silverton. Before the rest of us descended the other way for Bradninch, we admired another view in the East Devon direction. 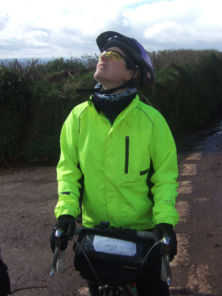 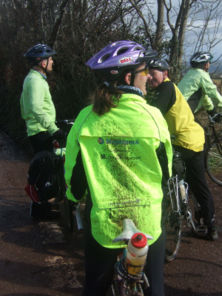 Roy left us at Bradninch and the remaining five of us carried on, aiming for Kentisbeare. Before reaching the village John saw a cricket pavilion and suggested we could have our lunch there. Of course I agreed, as today was one for showers. As soon as we got to the shelter the heavens opened, so luck was with us! 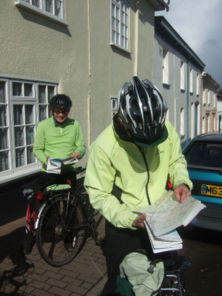 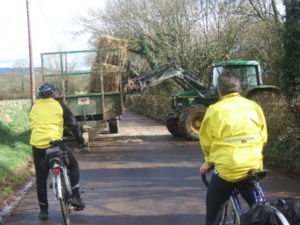 All refreshed and the shower was over till the next time, we continued along the lanes through Clarke’s Thorne, Weaver, Clyst St Lawrence, Southbrook and Rockbeare House. John kindly suggested we come to his home at Aylesbeare for afternoon refreshments and we all did. Thank you to John and his good lady.

Kirby then headed back for Exmouth and Debbie, Roger and I did a zig zag route for Exeter via Farringdon and Bishops Court.

Thank you to the riders for your support. There were not too many showers to spoil the day and we did see a fair bit of sunshine! 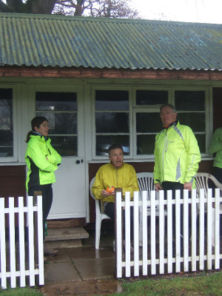 At least the weather kept the cricketers away
Retrieved from "https://www.lkjh.biz/index.php?title=DaExeterRide20080309&oldid=5147"