In spite of the promise of an increasingly wet day twenty four riders took part in the Exeter organised Treasure Hunt based at the Escot Aquatic Centre on 19th July. Led by organiser Kirby, John and Don drove the route before cycling it a week later to finalise the route instruction details. To this was added Kirby's collection of quality photographs, taken en route, which was to add a challenging memory test for the participants. 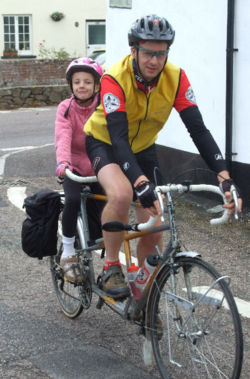 Anna and Kevin climbing out of Otterton

The route followed the River Otter valley down to Budleigh Salterton, returning on the opposite side of the river; this is except for one stretch near Tipton St John where the original road was used again to avoid a potentially dangerous minor road on the other side. Entrants came from as far a field as London, Basingstoke and Plymouth including some Wellington Wheelers who arrived on a separate outing, stopping only for coffee, and were surprised to be mistakenly invited to pay the entry fee. It was also nice to see Exeter Alternative Group meeting for coffee as well, so cyclists rather dominated Escot café during the morning. 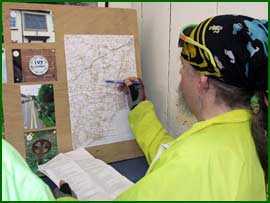 The instructions noted that there were also a few café stops on the 26 mile route and these were put to good use. Indeed the last competitors returning relatively late made the comment that they had visited most of the refreshment stops during the day. During the afternoon the rain established itself in earnest and caused the 'officials' to retreat into a useful stable extension that proved ideal for the photograph quiz. The twenty four pictures reflected features on the course, but the most any rider identified correctly was seventeen.

Little Anna Presland, the only junior entry who had accompanied her father on a tandem, managed nine pictures by herself, which was more than most of the adults! Anna was also the only contestant to find the secret word in Janice Voce's Fancy That Cafe and safely transfer it back to Escot.

In spite of the last two hours being subjected to the persistent rain all the riders seemed to have enjoyed the countrified and scenic route and did their best with the photographs. The results are now on the web site and our thanks must go to Kirby for such a successful event enjoyed by all.